On the Fifth Day of Christmas Memories: Blizzard!

Christmas 2002 was very exciting for us. We decided to spend Christmas in the States with my parents -- all of us from England and my son and his wife and my grandson, who would celebrate his 2nd birthday on the 27th of December. My son, Chris, was in the army and stationed at Ft. Lewis just outside of Olympia, Washington. He found a great deal on airline tickets if he took an early morning flight on Christmas Day. The Hartford airport was a good hour 15 minutes from my parents home in Kent so we were looking for them late morning sometime.

But they were racing against time. Against the time heavy snow was due to start to fall! As I recall we were expecting them around noon -- so we got our present giving out of the way and cleared up -- always keeping on eye out of the window looking for the now-dreaded white stuff. Well I suppose it was around 11:00 when the first flakes drifted down. The ground was frozen, it was very cold -- and would get colder -- so soon everything was white. But at just after noon the car pulled in. Their flight had not been delayed by bad weather, the roads were empty as they are on Christmas Day and they were able to get on their way without a hitch. Great relief all around. My grandson, Sam, was wide-eyed and shy with all the fuss. And it was then that the snow hit -- hard -- 18 inches by the time it finished! 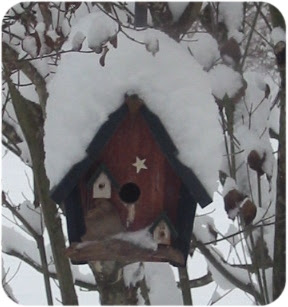 Two grandparents and two great-grandparents meant a plethora of presents for little Sam. And then two days after Christmas it was his second birthday and more and more presents. It's the first time I've ever seen a child completely overwhelmed by the sheer volume of packages to unwrap. And then before he had a chance to look at or play with one thing there was another to take its place. It was the first time I'd seen a child back away from more!! So we decided it best to mete out the gifts over the week or so they were with us.

In the meantime for the rest of the day it continued to snow. The neighbour turned up with his truck with the plow attachment and gave the driveway a quick going over and the rest of the day we all took time out to keep the way clear as much as possible. This was a new experience for The Man and proved to him that the temperature could be well below zero and you could still get snow! And that there were times when every man and woman needs to don hat and gloves!! 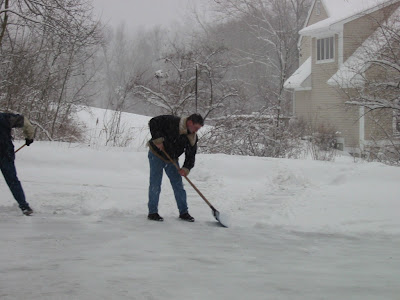 The next day was bright with  that blue winter sky that almost blinds you as it glistens off the snow. I took Sam and tried to walk him down the icy path to the road. His father measured him against the snow -- he sank to his waist, but before he could be alarmed he lifted back on to the road and we continued to try to take our walk. A few paces up the hill and he was ready to be picked up and carried back down again! 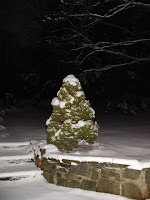 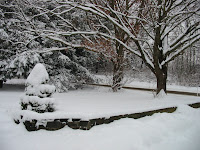