On the First Day of Christmas Memories: The Village 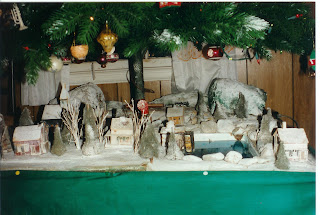 My mother was born in April of 1919 and by the end of the year her father had hand made an exquisite village for her. My Grandfather was the youngest son of German watchmakers and jewellers which made him a dab hand at anything that required delicacy of touch.

There were 3 windmills and each turned at different speeds -- depending on the mechanics of the pulleys located underneath the table the village stood on. The tabletop had been covered in canvas, which had been coloured green and stuffed in places to give the appearance of hills. At the back of the table were two plaster-of-Paris tunnels -- one at either end. Running between the two tunnels was a wide piece of cloth tape upon which was glued a hand-carved steam engine, coal tinder and two passenger cars. The tape was pulled along from one tunnel to the next and then went under the table -- pulled by the largest wheel of them all. It is an abiding memory that whenever anyone came to see us over Christmas, the first thing that would happen was the curtain around the table -- hiding the works -- would be lifted and rear-ends would fly up as men and boys went down on their hands and knees investigated how things worked! 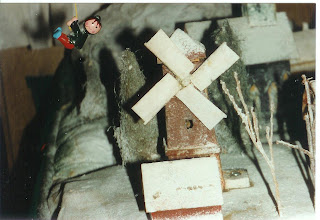 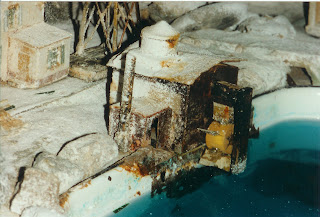 The roof of the windmill came off and thread would be pulled around a small pulley wheel and down and around through the table and over to a master wheel system and another wheel. The whole system was connected to a little motor of the kind you see with electric trains -- with a dial which dictates the speed that the rotor goes around.

The trees that you see are carefully selected twigs that my mother would periodically go out to find and the evergreens are made from steel wool which has been painted. These evergreens were very old. The trees were made to pierce through the canvas into the wadding of the ground beneath.


The mill to the right was placed next to an enamel basin. In this picture the original basin had been replaced and my father had not got around to plastering and painting it to look like the bottom of a pond!

When I was little the artificial snow was made of a
mica like substance that sparkled and had a real look of snow about it. By the time I was about 10 it was no longer availab and for years we could only get snow made of plastic bag like consistency -- it was horrible. Later my mother discovered this stuff you spray on and while it looked like snow, it stuck like glue to the houses and table and was impossible to remove. This was unfortunate as the beautiful detail of the houses and other buildings was difficult to appreciate. 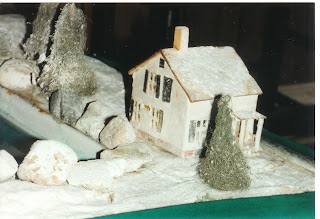 The white house with black shutters was my favorite as a child -- and it is pretty amazing to me that we would evenutally live in a house remarkably similar to this one! 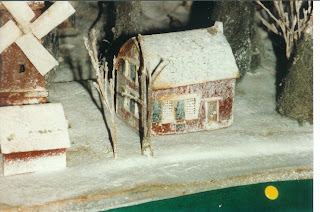 Every shutter and picket and pillar is an individual piece of work. All the windows are translucent and curtain and shades are hinted at behind them. The base of each building was solid with a hole about 2 inches across. This was so that the building could fit over Christmas tree lights -- yellow, white or orange, that were fitted into sockets on the table. The sockets were wired up to the motor with the dial I described earlier. There were two switches on the side of the table -- one for the big tree and the other for the table lights, windmills and train! Not bad for a baby in 1919! 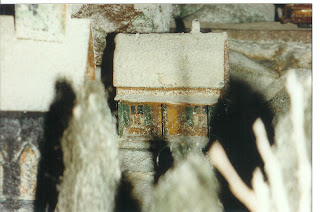 The first tree was not realistic at all. Now artificial trees can be difficult to distinguish from real ones, but when I was little there was nothing more artificial looking! For one thing the branches all stuck out straight. And at the end of each branch was a red berry! But the ornaments were wonderful and it is a great shame that none of them survive today. At that time if you dropped a bauble it would break!
What makes me laugh now is that when Christmas was over my parents would pack the tree away in its box -- fully decorated! Tinsel and all. When we lived in St. Johnsbury, Vermont, it was stored in a closet just off the living room. During the year it was the perfect place to the steal into when playing hide and seek and I remember clearly many a time ending up against the box with the tree. The sides of the box
had split over the years and I would indulge myself looking in and seeing the decorations and getting a magic injection of 'Christmas' throughout the year!

The pictures on this post were taken the last year my father put up the village. As he got older the rigmarole of getting it all out and setup and working was more and more a chore, not to mention the bore of having to put it all away again! For several years it lay packed away in boxes -- now my brother has it displayed in a wall cabinet in his apartment -- throughout the year. 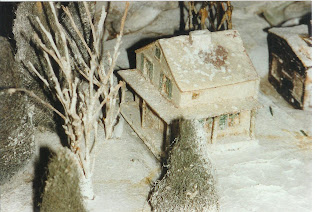