On the Seventh Day of Christmas Memories: Bavarian Christmas

Yuletide in Bavaria is the quintessential Christmas experience! The place is like a Christmas card come to life. The food, the smells, the markets, the decorations, gluhe Wein and usually snow!

There are treasured memories of our 5 years in Tutzing are of the people around our table and being invited to share in celebrations with other friends -- German, American and British. There is the memory of our very first Christmas when it started snowing on Christmas Eve just as we were arriving back at our apartment. We had a ground floor flat that was accessible from the outside garden. I can still see The Man's face standing on the patio, his beaming face toward the sky and snow flakes falling all around him -- it was the first time in his life he had experienced snowfall at Christmas -- and it was just perfect -- in other words not too much, but on the other hand not to little! And the Bavarian winters we experienced did not have the bitter cold of New England either. It was normal to sit outside basking in the sun on a winter's afternoon skiing. 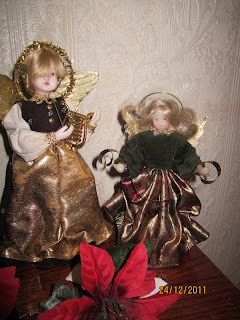 The Christmas season in Bavaria begins with Advent when the Christmas markets open. One of my favourite memories is walking down the pedestrian way in Munich -- it was late afternoon and had just started to snow when we heard the strains of Offenbach's Can-Can! We walked a little further and there to our right a stage had been set up -- and there they were eight or ten women in full regalia kicking high as the snowflakes whirled around them! The stalls at these markets are extremely varied -- from food to ornaments. It is true that many of them are filled with dross you can find anywhere, but there are also many with unique handmade gifts and ornaments the like of which you would never find anywhere but Germany: from complex hand-carved pyramids that turn from candle power to hand-blown glass tree decorations to angels made with delicate wax faces.

Christmas celebrations begin Christmas Eve (Weilnachten). The tradition for many is that the decoration of the tree is done by the parents of the household in great secrecy -- the doors are kept closed until the magic hour. When they are opened the tree is decorated and lit up -- often still with candles -- and under the tree are presents that have been left by the Christ Child (Christkind). The main Christmas meal is that night. Then there are two holidays -- Christmas Day 1 and Christmas Day 2 -- I don't recall hearing what the German words are for these!

New Year is known as Sylvester -- because it falls on the Saint's day. In our area of Bavaria it is traditional for families to go to go into the mountains surrounding Garmish-Partenkirchen and set off fireworks at midnight. The twinkling lights of the village below and snow all deep and crisp and  even crowned by a halo of light from the mountains is quite a magnificent way to see in the new year.

We celebrated 5 Christmastides in Bavaria. Because it is traditional for the Germans to celebrate their main meal on Christmas Eve, it was easy to incorporate German friends into our traditional time frames. One year my eldest son was with us and he was/is a good cook. We decided it would be fun to set up the barbecue and have a traditional summer barbecue cooked on the grill which stood in the snow in our garden. It tasted absolutely wonderful and was a huge hit with all our visitors -- who actually enjoyed going outside and keeping warm around the charcoal fire and sizzling pieces of chicken smothered in sauce! I think we did this on Christmas Eve.

In those days I would try to prepare the Christmas Day food as much as possible on Christmas Eve, so that my Christmas would be that much easier in the kitchen. Traditionally we would have twice baked potatoes and fillet of beef. We had lots of guests one year and friends in the neighbouring village had invited everybody to a Christmas Eve party -- which started in the afternoon. I was very busy with my preparations and said we should decline the invitation -- but The Man was determined to go and they all left me behind (yes, I was miffed) Anyway, left to my own devices I got on with the tasks at hand -- after having been lectured by my darling sister-in-law about how I need to learn how to delegate tasks! She meant that all the things I were doing could have been shared the following day with her!

Well, they all went off to party and party they all did -- until very late. The Man did get back, on his own, to take me to church about 10 p.m. There was lots of snow all around and by the time we got home it was snowing again. It was past midnight and they were all back and sister-in-law was in agony. In their less-than-sober state they had decided upon their return home that it would be great fun to take the sledge over to the park and slide down the new-fallen snow. Somehow it turned over onto sister-in-law and she did her knee in. She was in so much pain that the following day The Man and her husband had to take her to the hospital to get checked out! So much for delegating tasks to her! OHHHH! I was sooooo vindicated!!!! She could hardly walk for the rest of her stay, but since I had never learned to delegate, I could cope, dinner was served and 'the band played on ...', as they say!
Posted by The Broad at 12/31/2011 05:00:00 AM