Citizen Me: A New Life

September 1, 1980. I arrived in Britain expecting a baby in 6 weeks! The Man had arrived back in England at the end of the previous June. England was a blessed relief from one of the hottest summers on record. From Texas to New England temperatures ranged from 95 to 110 every day for the entire time. I spent the months with my parents while The Man got himself invited back into the Air Force and arranged to re-occupy his house in Norfolk. Then there was finding a doctor and arranging a hospital and a school for my very American son. Everything fell into place with only one or two hiccups, one being the baby boy arrived three weeks early! 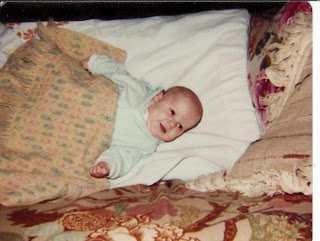 The doctor I had had briefly in the States had spoken so vehemently against the  NHS that I was terrified of having anything to do with it and in order to placate me, The Man arranged me to be treated as a private patient. When the obstetrician came to see me he informed me in no uncertain terms that if I wanted my baby to be circumcised he would refuse to be my doctor! I was so shocked at his adamant behaviour that I went along with his suggestion. Which actually turned out several years later to be an unfortunate mistake! I don't know if it is still the case in the States, but at that time it was usual to circumcise baby boys as a matter of course.

I was soon established in my new home and there was a lot of 'getting used to' to go through! In the  States there was almost universal use of disposal 'nappies' (a new word to remember instead of 'diapers'). The word 'nappies' I was to discover was short for 'napkins' -- and one did not use that word for 'serviettes', which are what, in Britain, one puts on the table next to the forks!!!

The baby had been delivered by a mid-wife, which I had heard about but never experienced. When I got home I had been assigned a 'health visitor', who was also a mid-wife. All women in Britain who have a baby are assigned a  'health visitor'. When you first arrive home she comes several times a month to check that you are coping the little one and that the baby's weight is on target and so on. They also are on the lookout for post natal stress. My health visitor was a lovely woman, but ... Well she definitely did not approve of disposable 'nappies'. Also they are made of terry cloth -- square pieces, so completely unlike the more gauze like diapers I had used in the States.   Somehow she implied that having terry nappies and soaking them in whatever that solution is called in buckets is more meaningful!! This was the process as I remember it:


Well, due to the cost of disposables and being nagged to death, I used these terry things -- very unhappily -- but any excuse at all to use disposables and I did!!! To top everything off, for the first three weeks or so we had a colicky baby on our hands -- thank goodness that lasted for such a short time -- seemed like forever though!
In addition to the trials and tribulations of 'babyville' I was cold all the time. The house was fairly new and had a furnace that heats up at night on cheap rate electricity and then heats the house during the day. By two in the afternoon the heat was running out! No more warm warm house in the cooler months. The thermostat was much lower than what I was used to. I was used to rarely having to wear a sweater inside -- excuse me, a cardigan or jumper -- and when I did I felt quite uncomfortable with the bulk. This sounds minor -- but there were a lot of changes going on here!
There was the shock of not having a clothes dryer -- I was expected to 'peg' them out on the line or use the airing cupboard. The first time I 'hung' the clothes on the line, The Man started laughing at me -- I wanted to cry -- in fact I think my eyes did fill with tears. Oh Woe, Woe, Woe was Me!
But there was someone who got me through it, someone who always made me smile and whom I am grateful to this day. Whatever would I have done without my early mornings with that Irish charmer, Terry Wogan?
Posted by The Broad at 2/20/2012 07:01:00 PM