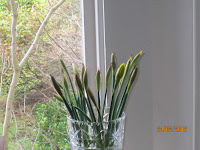 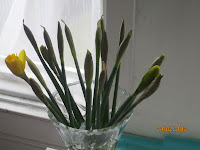 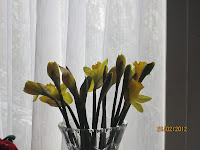 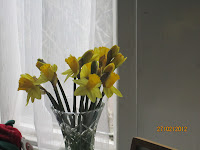 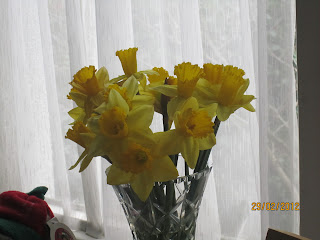 Day by day Spring is just around the corner. Daffodils are I think my favourite Spring flower. Where I grew up in New England it was pretty rare to see them much before April or even May. As I type away here at my desk the delicate fragrance is wafting past and it's all just heavenly.

A few weeks ago thanks to a friend of mine I heard about a book that absolutely intrigued me and I immediately ordered it.  It is so entrancing that I have to tell you all about it. 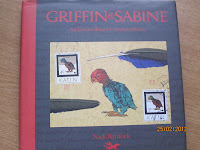 It's good to get in touch with you at last. Could I have one of your fish postcards? I think you were right -- the wine glass has more impact that the cup? " 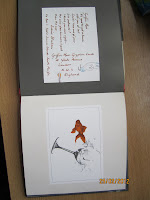 As you turn the pages a mystery unfolds because Griffin has no idea who has sent him the postcard let alone how she knew so much about his artwork. An extraordinary correspondence follows. And as you turn the pages the story proceeds through illustrations and a bit more than that as well... There on the top is the original postcard. Back and forth between England and Australia the postcards fly and the mystery deepens.

Finally Sabine sends him a letter... let me show you the first one: Within each envelope in the book there is a letter to pull out and read -- four in all! 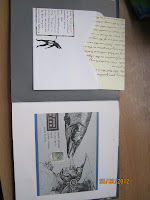 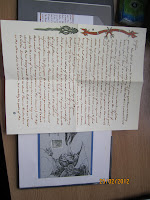 And so you participate as the story unfolds -- literally! The illustrations are beautiful and the story a bit like a fairy tale. It it is a joy. There are two more books in the series, which I have yet to get my hands on, but I am looking forward to complete the series in the near future.
(I am quite annoyed at the moment as the pictures have not uploaded in the correction direction -- somehow, except for the first one, they have all been uploaded on their side. Silly old blogger strikes again!)
I have quite a substantial pile now of books to read and DVD's to watch -- I love having books and films in waiting! And others are on the way -- thanks to Dee Ready's recommendation I have today ordered The Sweetness at the Bottom of the Pie by Alan Bradley. And then in a couple of weeks Jo Nesbo's new detective thriller, The Phantom will arrive! Holy Book Review, Batman!
Next week the saga of my  journey towards British citizenship will continue. As one memory follows another word the story is longer and longer. I thought I would just gloss over events, but once started down memory lane the details expand and my reflections exceed all expectations. I had originally thought the whole story would be complete in two posts! In fact, after two posts, I was just getting started!
Posted by The Broad at 2/29/2012 05:11:00 PM