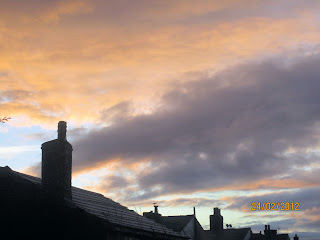 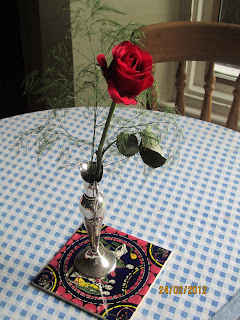 The early morning sky can put me in a very reflective mood -- and so it was yesterday with this sky from my kitchen window.

As I sat at the table my eyes fell on the rose in the vase on the tile and I realized that all three reminded me of wonderful people who have blessed my life. The tile was a souvenir from my parents when we were all in Canterbury together many years ago. It was a wonderful visit with many surprises and many wishes fulfilled. In addition to Canterbury my mother was thrilled to visit Sissinghurst gardens and Knowle House. The gardens were at their peak and the white garden there turned out to be my favourite all time garden experience! In London we all went to the Royal Albert Hall and saw the ballet Romeo and Juliet -- it was fabulous... My favourite memory of the trip was insuring that they had their passports on them at all times without letting on that on the pretext of going to Canterbury, we were actually heading for the Channel Tunnel and a quick day trip to Lille to visit with my sister-in-law. They were thrilled to be the first of their friends to cross the channel this way!
The vase is sterling silver and was given to The Man and me from one of my dearest friends. She is originally from Germany and was a neighbour of my parents when they lived in their last  house. Besides the fact that she has more energy in her 70's than any person I know she is also one of the most talented and interesting. She also saved my son from a very dangerous disease.
In August 1997 our family was visiting my parents in Connecticut. The Man always liked to help my Dad in their garden and there was a lot of work to do clearing up overgrown bushes and brambles and carting them to the woods at the edge of the garden. A few weeks later my youngest son, Robert, came down with a terrible flu and very high temperatures. A week or so later one side of his face was frozen and he was diagnosed with Bell's Palsy. The prognosis was that it could last a few weeks to a few months, but was not usually permanent. In the meantime there was a big wedding in the family at the end of the month just before we were due to return to the States and we all headed up to Vermont for the celebrations. Other than the palsy, Robert was OK and we all went, enjoyed ourselves and hurried back to pack up and leave the next day.
While The Man was putting our suitcases in the car, my friend drove by, realized we were leaving momentarily, and came in to say goodbye. As soon as she saw Robert she realized that in all probability he was suffering from Lyme Disease!! This disease can usually be taken care of by antibiotics, but it is important to seek treatment immediately! The Man and I left for England very worried. When we got back to England England was a very weird place and even more so for us. The end of August 1997, the day of my brother's wedding was the day Princess Diana died! The first thing we did upon our return was see the GP.
Not experienced at all with this affliction he thought it unlikely that this was the problem. However, bless him forever, he said that he would be in touch with the experts in the field of this sort of disease for advice -- which he did immediately, because the very next morning we had a phone call from him to get down to a hospital in Liverpool -- the poor boy had to have a spinal tap. The results of his tests showed that there was a problem and for 10 days we were having daily visits for massive  intravenous doses of antibiotics. It was incredible to see him respond to this treatment -- noticeably within 24 hours. His reaction to the disease was neurological and is the most serious -- a lot of things just don't bear thinking about -- so many what if's.
Amazing the memories a little silver vase can trigger!
A finally we come to the rose -- it's the last one from my Valentine bouquet from The Man himself! Believe me there are a lot of memories there!! 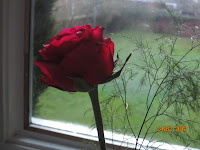