Not long after the Blackpool evening we were invited to dinner at Beryl and Derek's house, which was also a bed and breakfast hotel. They entertained friends in the bar of their hotel and evenings in their company were always great fun and there were always other people for us to meet as well. This particular evening there was a couple around our age. She was very attractive and had quite an odd personality. Beryl had warned us that she could also be very unpredictable -- and had a reputation for being psychic! I can't remember her name but let's say it was Miranda.

Well a few weeks later one of the other women who had been there that night was at our house for tea and during a very amiable chat, she leaned over to me and said something like, "Did Beryl tell you what  Miranda told her about you?"

I was quite taken aback -- as it hadn't occurred to me that Miranda had taken any real notice of me. "Nooo," I said, a bit apprehensively.

"Miranda told Beryl that you were definitely pregnant! Are you really?"

Well you could have knocked me over with a feather, because not only was I not pregnant but as far as The Man and I were concerned we had already four children between us and we were not planning to have any more. "Absolutely not -- no more for us!"

Now Beryl and Derek were the most darling couple in all the world, but this story went around to everybody! The Man and I were quite stunned in a way -- and quite relieved that Miranda was wrong, too.

Six weeks later though, it was a different story!!! I've never seen Miranda again and I'd never seen her before ... "And therefore as a stranger give it welcome; There are more things in heaven and earth, Horatio Broad; Than are dreamt of in your philosophy." (Thank you Hamlet, thank you Shakespeare!) Let me tell you it's is quite a shock when someone tells you you are pregnant before you are!!!

The period of my pregnancy coincided with the most difficult period during our marriage. As I was no spring chicken it meant that we decided to have an amniocentesis. I was convinced that at last I would have a girl, but I wanted to be prepared in case it was a boy. Good decision!

The amniocentesis was traumatic -- the doctor who was a woman could not find the fluid and it went on and on for over half an hour and then when they said they were going to do it again I got hysterical -- I don't think The Man has ever before or since seen me in such a state! An the doctor was not only inept she started telling me off!!! Anyway, another appointment with my Consultant this time. Mr. Wilson had a very fine reputation as a doctor but terrified the sisters, nurses and even Matron, but was always very sweet with me. Anyway, there I was once again on the table, but this time only Mr. Wilson and an assistant, not a whole platoon of people like the time before. I got ready and grimaced waiting for the procedure to begin and within 5 minutes he said, 'You can stop grimacing and holding your breath now -- it's over!'

As the pregnancy progressed I began to suffer sever bouts of tunnel vision. This problem was always solved by lying down and having a nap. It happened once when I was waiting to see Mr. Wilson about two months before my due date. I am still not sure what the problem was, but I think my blood pressure was soaring. As I was waiting for Mr. Wilson to come in to see me I heard him on the phone. He was telling the person on the other end that he needed a bed that day for a patient. Then he gave her name. It was me!! I hadn't even seen him yet! So I ended up in the hospital ward for a week with maybe 10 other expectant mothers. I was told I needed a rest. It was one of the most fun weeks in terms of camaraderie I've ever experienced -- we all relaxed and laughed a lot!

Pregnancy aside, there was something else going on during all this. The Man decided that he needed to do something to improve our financial situation and that the way to do this was to buy an investment property that we could live in as well. He found a place that we both decided would be viable, but would be very demanding as there would be serious renovation involved. Somehow, The Man, was able to convince the Bank Manager to agree. The place we found had 7 bedsits/flatlets and the income would pay the mortgage off in 10 years! In 1983 this kind of property was much cheaper than it is today! Even so a lot was at stake and a lot of hard work for The Man lay ahead...

On March 17, 1983 we exchanged contracts, on 20 May 1983 our boy, Robert was born and by the end of the summer we went 'where angels fear to tread' and with three boys, moved into a house, under renovation! 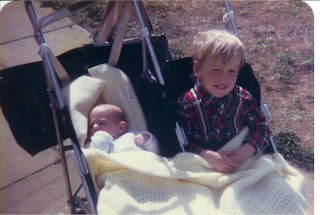