Citizen Me: Some Groundwork and a Party 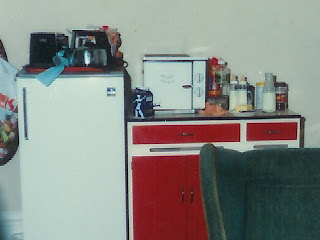 The photograph above shows most of what served as my kitchen for a short time. The white box in the middle is what served as an oven. On the top of the oven is a hob. The hob worked very well as far as boiling water was concerned. I tried once to use the oven -- to bake a meat loaf. It took over three hours! In the meantime work progressed downstairs. 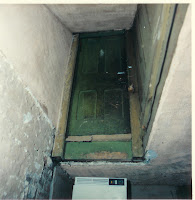 The stairs in what was to become the kitchen had been removed. This was done by The Man and The Boy. The storage area that had been off the hall had its wall torn down and a new wall was erected with access to the kitchen over the top. This new space would provide us with a dining area. 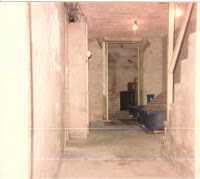 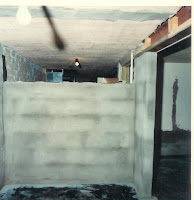 In addition an entrance to the new dining area had to be opened up from the living room. Since it was a load bearing wall our builder/teacher had his men put in the necessary RSJ (Reinforced Steel Joist) to prevent the house falling down! You can see the new entrance and joist  in the picture on the right.

Below the chimney breast had to be opened up and re-plastered. Now my memory is hazy as whether we had the walls and ceilings artexed before or after the damp course was put down.  What I do remember is we had to clear the entire living space to be in order for the damp course to be laid. For sure one was done within a short time of the other. The other thing I remember is that the kitchen was definitely a work in progress. Actually, I don't think it had progressed at all!!! 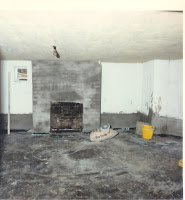 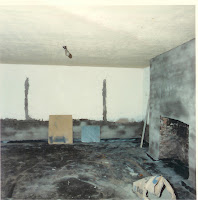 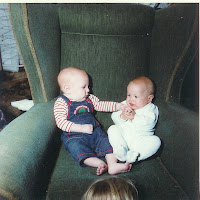 So this was a very good time for our first dinner party, don't you think?

In an earlier post I mentioned 'the ladies' who shared the flat at the back of the house. They took a real shine to us and having the darlingest sweetest new baby didn't hurt at all. Two of our closest friends were visiting England with their new baby -- one month younger than Robert. Her name was/is Gabrielle. Now she has children of her own!

'The Ladies' I mentioned in an earlier post came to the rescue and opened up their kitchen to me. When I think of it now I do have to laugh at the running to and fro. The other day I saw a program about one of these huge English piles where the dining room was purposely located as far as possible from the kitchen, which was even on another floor -- this so that no smells would permeate through the the guests! Many hands, however, made light work of the two-ing and fro-ing and at least I did not have to 'dress' for dinner. I cannot remember the entire menu, but I cooked roast a leg of lamb with roast potatoes and plenty of vegetables for the main course. After covering the new black damp course with various scatter rugs we set up the table in the newly artexed living room and food never tasted so good. Good food, good wine (or plenty of it anyway) and the best of company make for a perfect times.