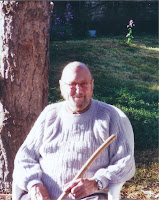 Some of you may remember one of my Twelve Days of Christmas posts about the Loriol family (here). About a month ago I received a card from Mme Suzanne Loriol that Georges had died on 26 February. About six weeks earlier I had received a long newsy letter from Georges in response to my Christmas message, as well as a photograph of him and Suzanne taken in November. The letter was still in my 'in' box awaiting a few moments of my time to write back to him. I can see it now peeping out from underneath some photographs. I so intended to write back and to send photos and to make plans to see them both in September on our return to the UK from France.

Georges was a school headmaster, but he started his career in education teaching English. When I last saw him and his wife and son, Etienne, it was his 80th birthday which was on the 23rd of April. He was extremely proud of sharing his birthday with Shakespeare! The Man and I and our two sons were feasted on Lamb and we were regaled with stories of our past history together many years before. Etienne was seated next to me and it was astonishing to see him as a grown man with a wife and children of his own -- and a very out-going and gregarious personality, much like his father. This year he would have been 92.

A day or so after receiving the news about Georges' death I decided to see if Etienne was on the Internet. I Googled his name and discovered that he was on Facebook. I sent a 'Friend' request and he responded almost immediately! So after all these years of wondering whatever happened to them I am back in touch again and have even 'seen' him and talked to him on Skype. He no longer lives in Niort, but in Agde with his youngest son. Sadly his wife died of cancer a few years ago and he has been through a great period of grief and sadness. He has been going through the many thousands of photographs his father had taken over the years, including many from the year 1955 in the United States. Here is a very special one...