Citizen Me: You Never Know 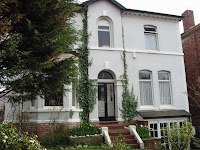 After we lost the house we had set our hearts on, it was difficult for me to find the heart to look for another place. I made it a point not to walk past the house -- especially on my way to pick up little Andrew from school. Occasionally I would glance through the papers to see if anything looked tempting and we did look at a  couple of places in the same neighbourhood. Nothing was quite right.

In the Spring of 1986 The Man put the house we owned in Norfolk on the market, but at that time the market was rather slow and the offers we had were derisive so they were turned down. At the same time I made myself walk down a street where I could see over the wall of the garden and the rear of the house that I had so wanted. Doing so pained me, but at the same time it was like a ghost had been lain to rest and I could get on with my life.

One day in September I met up with a woman, who like me, was going to school to pick up her little boy. She was terrible excited because she and her husband had just exchanged contracts on a house of their dreams. It was a house that they had hoped to buy and that had been sold out from under them and so they had found another. When the house was suddenly up for sale again, they were able to get it. I told her that I wish that would happen to me and told her the saga of our 'lost' house.

The very next day, I met up with her again and she said to me, "You know that house you told me about -- it's got a 'For Sale' sign up"! How amazing was that?

Sure enough, when I walked past the front of the house not twenty minutes later, there was indeed a 'For Sale' sign there for the world to see! When I called The Man with the news, he said "I think we are meant to have that house!"

The next day The Man knocked on the door, the owner remembered him, and the next day we went to view the place. They had done a lot of work on the house. First of all the problem of rot under the shower had been fixed. Upstairs there was now an en suite bathroom off the master bedroom and a new family bathroom. The upstairs had been carpeted and re-painted and what had been an elaborate bathroom downstairs had been made into a smaller shower room and utility room. In addition the back door was re-opened and the stairs leading down to the garden had been rebuilt.

The following day we made an offer and it was accepted. While the price had gone up, it was no more than the cost of the work they had put into it. When we got home from our offer being accepted, the dear ladies who were looking after our boys, told us we had had a phone call. We had had a new offer on our house in Norfolk -- and it was  one we were very happy to accept!