Finally, I feel like posting again. Quite simply a  bad cold has laid me low and I haven't been able to concentrate enough to even string enough words together to make a complete thought. I blame airplane travel. When I finally boarded the plane on 2nd May and found my seat, I heard the warning sounds of chesty coughing coming from the lady seated directly behind me. I knew I was doomed! 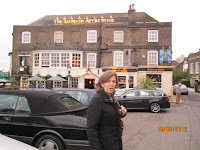 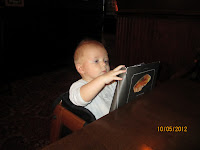 Having safely landed, however, The Man and I had  made plans to do some British sight-seeing -- places I had put 'on my list' and had yet to cross off... On the 9th of May we headed for the St. Albans' hamlet of Markyate and The Man's brother and sister-in-law for the night. As usual they had generously invited other members of the family to join us for dinner. The next day we travelled to the not too distant Brentford, to spend the night and to have a pub dinner at The London Apprentice, which is located on a picturesque setting along the Thames. We were also very happy to be spending a second evening in the company of the newest member of the family, our grandson, Bertie. Seen here all of 9 months, studying the menu!

Earlier in the day, we had experienced our the only disappointment of our trip. Because it was the middle of the week, The Man had thought he could drive into London because he wanted to cross Southwark Cathedral off his list! Four frustrating hours later we headed back to Brentford having failed in our quest. Another day, with bus passes at the ready! Do. Not. Drive. In. London...

On Friday the 11th with the sun shining brightly, albeit cool and breezy, we headed for the Salisbury plain. Once upon a time, in 1993 I had almost crossed Salisbury Cathedral from my To Do list. However, The Man decided, in his wisdom, that 3 pounds Sterling was too much to pay for parking -- I'd been rankled ever since! This time, he didn't hesitate ... We drove into town, found a parking garage and before I knew it, were through the Cathedral doors. Finally ... 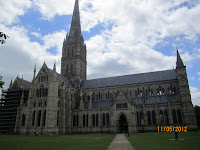 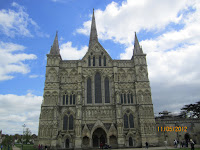 The trouble with iconic landmarks is that when you get there, it is so difficult to take it all in! There is the size, the history and the age. There is a wonderful model of how the Cathedral may have been when under construction. I absolutely loved reading Pillars of the Earth by Ken Follett,  which does an amazing job of explaining how important these building were to the people of the time, the dangers inherent in the construction, the intricacies of construction -- so much was learning as they went. The physics of these structures was not understood. It is hard for us to imagine how the sight of these Mammoths of man's talent and ingenuity must have appeared to the men, women and children of the 13th  century, never mind earlier than that.