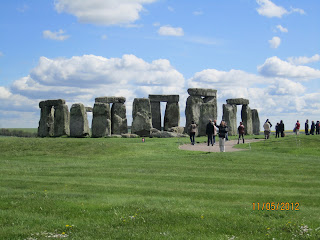 Stonehenge is one of those places on everybody's list of 100 places to see you die. Ever since I first heard about it at the age of about 10, the idea of it has fascinated me. As you can see from the above picture, the sun shone and despite a good breeze, it was not unpleasant. What surprised me was that it was smaller than I imagined it to be. It is possible that the reason for this is the distance the public is kept away from the stones. You can't really tell how big or small they are. It is possible to take a tour before and after hours at 15 pounds each, but we were not able to arrange for this in time -- though if the opportunity arises I would try to do it. I don't think it can be appreciated fully without being able to 'get up close and personal'.

Last night it occurred to me that it would help just to have some life-size figures standing nearby to give some idea of the scale of the place when I had a brilliant idea. Can you imagine, a display of the iron men, by Antony Gormley in and around Stonehenge? The thing is the figures are life-size and just eerie enough to pull it off and could work really well to give an idea of the scale and mystery of the whole area.


I expect it's blasphemous to even think of desecrating the site in such a way -- the pre-historic Mecca of the  British tourism. Nevertheless, the idea appeals... I am not thinking such a thing would even be possible  -- but imagination can go where it likes!

Here is the thing about Stonehenge: I can see more of its mystique in photographs and television documentaries -- on film -- that I did in person. I had already bought a small tourist guide at Salisbury Cathedral and looking at it a few days later I was more entranced than I was while standing before it!