What Happened on the Way Home

It all began so well -- my trip back to the UK. There was a caveat going around in my head though. The trip to the USA had been so perfect in every way -- right to the very end when my brother was there waiting for me and so was my luggage. We all suspected it was probably going to be problematic on the return journey. And it was.

The day started off just fine -- everything went almost like clockwork -- should have been a warning. The first niggle was very minor -- merely a mix-up in time for lunch. We were meeting a very good friend for lunch in Kent, Connecticut -- a 40 minute journey from my mother's place of residence. We had Noon as the time -- she had 12.30 -- wasn't a problem, could have been avoided -- but lunch was still fun and we made it back with Mom in plenty of time for a tiny shopping spree and fond farewells. The plan was for me to follow my sister back to the airport. That all went fine. Car turned in -- no problem. Caught the bus -- so far everything was one, two, three.

I had had difficulty the night before when I logged on the night before to get my boarding pass -- I suppose that was the first sign that there was "Trouble Ahead"... my reservation kept going around in circles and I was advised to 'call this number'. Which I did and was able to book my 'choice' seat. But I could not print my boarding passes. Which meant that I would have to do this at the airport. However, I could not use the machines installed there for this purpose -- because my passport cannot be scanned...  not for two and a half years. For a very good reason.

Two and a half years ago after a trip to the States I had left my passport in the pocket of my vest/waistcoat and it went through the laundry! Have you ever seen a passport that went through a washing machine? 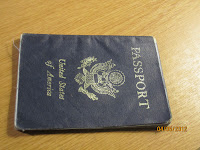 When this first happened two and a half years or more ago, I wanted to get a new one -- even though it does not expire until June 2013. This is after I read on the US Embassy website that damaged passports should (not must) be replaced.

The Man was of the insistent opinion, once it had dried out and stuck back together, that there was no need to spend the money get a new one. The only reason I went along with him then was that if I sent it in to the Embassy they would no longer accept it as proof of my identity. I would have to start the application-for-a-passport process all over again. This meant getting an official birth certificate from the State of New Jersey where I was born. When I tried to do this by contacting the authorities in the town where I was born I had so many problems with being put on hold and disconnected that I gave up and decided to see what happened if I used the laundered document in my possession. No problem! All that officials ever said to me was -- 'it got in the wash, didn't it?' -- or similar words.

Now, I must admit that while I was home I noticed some additional deterioration of the passport in that the cover was beginning to separate: 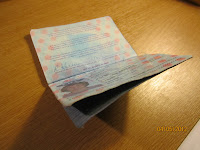 Unable to get my boarding pass online the night before, the first inkling there might be a problem came when the woman at the airline desk saw my passport and didn't think it was in a suitable condition.  Somehow I did convince her by pointing out I'd been using it for 2 and a half years and had never had a problem with immigration officials. Reluctantly, she got me my boarding passes and I took my bag over to the security fellows. Off I went to Security. The official there looked at the passport, made the customary 'laundry' remark and stamped me through to Security. I boarded the plane to Philadelphia without a problem.

Plane left 20 minutes late, but I still had plenty of time to make the flight to Manchester. Passengers were called to start boarding -- I was in Zone 2 so was among the first to board. Had my boarding card and passport opened to the appropriate page and handed it to the girl at the gate. She took one look at the passport and walked away and said, "Follow me" ...