The Man is now in France -- safely arrived after a long tortuous drive to The Lot. When I spoke to him on the phone his first words were, " Whenever I come without you, there is a big problem..."

He was up at 5.00 a.m. Sunday morning for the drive from his son's house in Epsom to Dover and the 7.00 a.m. ferry. He arrived at the house at 7.00 p.m. Everything inside seemed perfectly o.k. -- aside from the numerous spider webs. He turned on the electricity and opened the shutters and doors. Very little damp -- didn't smell musty. So far so good. He went into the kitchen to turn on the water ... oops!

It spurted everywhere from the meter -- poured out ...

Gasping for a cup of tea, The Man had to make due with wine!

I suggested to him that he go next door to the French neighbours and ask for a jug of water -- but he was too tired to deal with French and pleasantries and besides he felt it was not beyond him to deal with the water company himself. (Ho, ho, ho!)

He called them the next morning and tried to explain his problem. He explained he didn't understand what they were asking him -- The last time we had a water problem 'avant' and 'devant' was what they wanted to know as it has to do with whose responsible for the work to be done. Those words are confusing to keep straight and I had to get a neighbour to talk to them. Anyway, when they had not arrived several hours later he took my advice and went next door -- where they have learned how to cope with his inability to speak sensible French. Madame Estival provided him with water and called the water company and an hour later they appeared. Within 10 minutes a new meter was installed and the water was flowing and now all is well.

The man is now busy cleaning the terrace and will then take on the lawn. It is of course over-grown. This year his mate, John, has volunteered to bring his ride on mower down and cut most of it. Good for you, John!! Wednesday was market day in Bretenoux and he went and bought petunias, marigolds and geraniums,  and  now the terrace is planted and potted! Once the outside is in order it will be time for The Man to get to work on our bedroom -- but more about that to come in a future post.

And before the summer is over, he also has to figure out what to do about this: 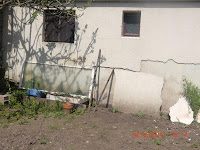 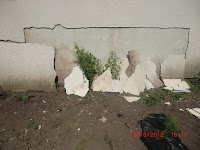 This side of the house is bang up against the Estival's property line -- so we never see it. Does anybody know anything about repairing rendering?

Email ThisBlogThis!Share to TwitterShare to FacebookShare to Pinterest
Labels: France