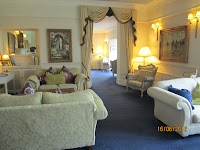 Last Friday, June 15th, was my birthday. One of my dearest friends decided that my birthday present would be to take me to the Lake District for a special meal and over-night stay. Our venue was the Fayrer Garden House Hotel in Bowness. And a very beautiful setting it was -- despite the non-stop deluge of rain that persisted all that day and for most of the next... 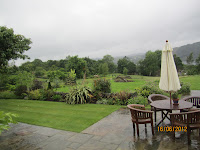 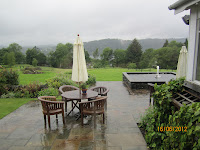 It was my intention to use this post as a rant on the many years that my birthday has fallen on rainy, cold, miserable British summer days. Yes, indeed, I am taking this very personally. I grew up with a birthday almost guaranteed to be warm and sunny. England has never -- not ever -- cooperated. But at least this year I was surrounded by great beauty and luxurious surroundings. And I didn't have to leave the hotel for dinner as the restaurant was superb and the service friendly, but impeccable.

So I have decided to let the rant go -- The Good Lord willing, there is always next year ...

On Saturday we left to explore the area around Ulverston and to meet up with my friend's husband. They have decided to move from North Yorkshire to the Ulverston area in order to be near the Manjushri Kadama Meditation Centre. The centre is a modern Buddhist establishment dedicated to the attainment of world peace. I was absolutely fascinated by the visit. 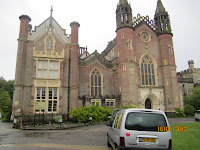 The rambling gothic Conishead Priory was rescued from years of neglect and is being painstakinly restored by the residential community. The Buddhist Centre stands in 70 acres of grounds that include mature woodland, paths, a lake, streams and a beach on the shores of Morecambe Bay. The history of the ancient Priory is very interesting:


The present Priory building stands on the site of a twelfth century Augustinian Priory. It was originally founded in 1160 by Gamelde Pennington as a hospital for the ‘poor, decrepit, indigent and lepers’ of the Ulverston area. The hospital was run by the black canons of the Order of St. Augustine. They ate and slept under one roof, living a common life of poverty, celibacy and obedience in accordance with the example of the early Christians. They also conducted a school at Conishead for the children of their tenants and workers. (More history)

In 1997 on the site of the old Priory kitchen garden, the new Manjusri Kadampa Meditation Centre was opened. I was impressed by the underlying simplicity of the structure which seems to be able to describe the complexities of this world without succumbing to them. Every level is representative of something intrinsic to the attainment of spiritual enlightenment. There is a lot of symbolism within and without the Temple -- much more than I could possible remember let alone understand and properly describe. However, I do have a worthwhile example. 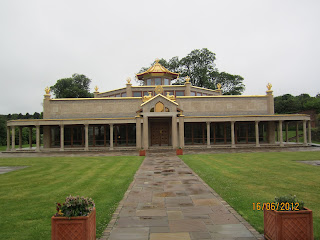 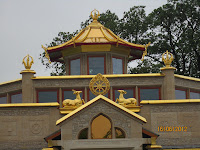 The male and female deer with the wheel between them symbolize the final stages of the path to enlightenment. They are above each of the  doors on the four sides of the temple. The male deer symbolizes the experience of great bliss; the female deer the realization of ultimate truth, and the wheel the union of these two realizations.

The adornments on the roof are gold-leafed, which required many weeks of work by Kadampa artisans, and the windows above the doorways are impregnated with gold. Precious substances such as gold are made as an offering to the holy beings. They also symbolize the preciousness of the spiritual path as the only way to achieve liberation from suffering and experience lasting peace and happiness. To a Buddhist, inner realizations such as wisdom and compassion are far more valuable than ordinary wealth.

I found the interior of the Temple to be very peaceful and calming. It surprised me how much it reminded me of the interior of the Roman Catholic Cathedral in Liverpool. The people I met were very warm and welcoming. Unlike Christian churches, Buddhists do not have missionaries. They wait to be invited... They do, however, welcome all people who visit them. The Temple is open to everyone.  For more information about opening times you can visit their website. 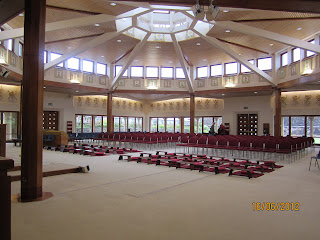 While I found the experience very interesting and worthwhile, I was not comfortable with certain things -- especially the statuary and the ornate decoration of the different Buddhas. I was, however, intrigued by a very ornate 'mandala' with many objects of a symbolic nature and I loved the symbolism and effect of the large central lantern. One thing is for sure, modern Buddhism is here to stay. Centres all over the world are growing at a phenomenal rate and so therefore are prayers for peace and tranquillity -- that has to be a good thing...
Posted by The Broad at 6/19/2012 03:33:00 PM