Back to France and the "Why" of the Walls!

In answer to a question in a comment from Friko as to why the walls we tore down had ever been put up in the first place. (See It's All in a Day's Work.) It all goes back to the French couple who owned the house before we bought it. They had bought the place in the late 70's as a retirement home. The upstairs hand never been lived in. The house had been a two-room cottage. It must have been very very basic at the time.

The kitchen, separate toilet and bathroom and a small upstairs bedroom were added to the house at the time of the initial renovation -- right up to the property line of our neighbour. What had been an inglenook fireplace was made to hold a wood burning fireplace that also allowed heat to filter upstairs.

The couple must were not very tall. Madame could walk down the centre of the upstairs passageway without difficulty, while I had to scrunch up against the wall separating it from the two bedrooms. They needed this passage way to get to the other side of the first or second floor -- depending on which continent you live!!!

Here is a floor plan of how it was when we first bought the house:

When we first looked at the house we were not at all happy with the upstairs. But we thought maybe it would be possible to 'fix' it with a little bit of ingenuity. In other words we had a 'plan':

Let's build a second staircase at the other end of the original cottage -- in the dining room. We were very lucky that our neighbour M. Estival, was not only a charpentier and and ebinieste -- he had also constructed the existing staircase as well as all of the other cabinets and windows and doors in the house! We approached him for a quote and discovered that his was by far the most reasonable compared to two others -- he also would build a mirror twin to the existing staircase and would build it of oak and would cut the hole in the ceiling -- all other quotes were for pine and for The Man to cut the hole. And we didn't have to pay him until the work was done and when we got back the following year was just fine with him! We left France in September, he built the staircase over the winter and  was finished when we came back to France the following June.

A floor plan of the ground floor of our house with the new staircase:

I have been shocked to discover that in all the years since the second staircase was built, I have only taken one photograph and that just shows the corner of it! So here is a picture of the original: 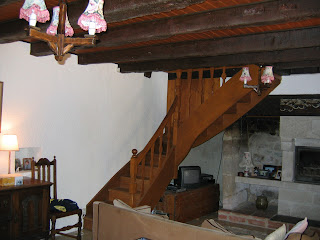 And here is a reminder of how the bedroom was when I last saw it at the end of September.

Since then  the electrics have been re-done (no more light hanging in the middle of the room) the walls have been papered and carpet has been laid. At the moment The Man is starting to build the Closet where the old wardrobe used to be. By the way, does anyone know where he can buy louvered doors -- either in the UK or in France?

Email ThisBlogThis!Share to TwitterShare to FacebookShare to Pinterest
Labels: renovation