All Wired Up and Ready to Go 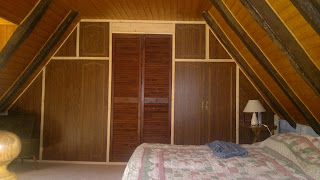 Our new bedroom seems huge to us! All of the work was done by The Man. The biggest job -- which is true of all renovation, is what you can't see! Above the ceiling is a loft and his first job was re-wiring the electrics so that it would no longer be necessary to have a lampshade hanging from the middle otf the ceiling for him to hit is head on. If you recall in the little film I made, you can see the electrics hanging in mid-air. The electric sockets that had been on the wall behind the bed, now had to be moved to the new wall.

After that a bit of wallpapering, the laying of carpet and oh yes more miscellaneous wiring!

The Man had told me that he would not be able to build the closet until next year as he hadn't brought enough wood with him and he couldn't find the louvred doors that he wanted. However, the more he thought about it the more he thought he could build a temporary solution by using the doors and material from the old wardrobe!

He started to build the frame. As the structure took shape he discovered that the doors from the old wardrobe were pretty much the right size for what he had in mind from the beginning.

While all this ingenuity was taking place, I was in England getting daily reports from The Man who was sounding more and more pleased with himself wnile at the same time insisting that I was to be the final authority as to whether all his work as acceptible...

Of course I love everything he did! Believe it or not, the estimate we had from a neighbouring carpenter to build the closet was 2,700 euros. The Man reckons it cost him 60!!