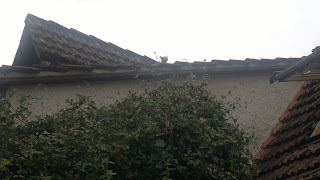 It was mid-afternoon, the day after our very interrupted night's sleep when we once again heard cries coming from the roof overlooking the terrace -- every bit as loud as the night before. "Meow, Meow" ad infinitum it seemed to us.

"There it is!", exclaimed The Man from his vantage point between the pine trees.

"Meow, MEOW" whined the kitty-cat from the top-most part of the rooftop.

Suddenly, Dee Ready's cat, Dulcy, took over my psyche. (I was in the midst of her book at the time)
"Meow, Meow" I answered her cries. Joining The Man at his vantage point, I could for the first time see the little mite. Since we never did discover kitty-cat's gender for sure, I am going out on a limb and dubbing 'him' a chappy -- he had that 'little lost boy' look about him that is almost impossible to resist. I've named him Percy because he was so persistent ...

Anyway, I 'meowed, meowed' back and forth with little Percy and he would step forward from the top of the roof half way down and then back away again. So I guess I was sort of convincing. Anyway, at some point or another I spied my phone and started to film him and his meowing-meowing. While I did this The Man went out on the little balcony and tried to entice him with a small bowl of milk. We knew the little mite had to be hungry because Mama was refusing to feed him in order to lure him down to the ground as his sibling had done before him. Anyway as soon as Percy saw The Man with his offering he scampered back up to the farthest point on the top of the roof.

Then after a further 'nudge' from my feline controlled psyche, I started to play back the bits of video I had shot complete with the sound of Percy's meowing.  A Ha! I had not been able to convince him with my own meowing, but he knew authentic 'meowing' when he heard it. I held the phone/camera up toward the roof and he came right down the the edge. He was looking and looking -- scampering from one end of the roof to the other. Peeping over to the balcony looking for the source of his fellow creature.

You can see from the picture that at the edge of the roof line there is an overgrown honeysuckle bush reaching for the sky. I held the phone up into the bush and after several minutes hesitating he courageously jumped! I didn't get everything on the little video, but here is the gist of what happened:


And so The Man took him across the garden the the area around the haystack and set him down -- in the hope that Mama would come and fetch him -- before a hawk or some other bird of prey ... 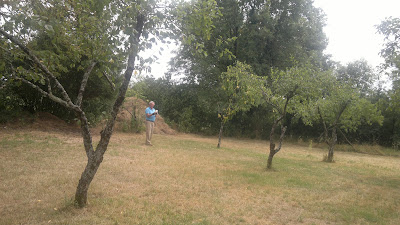 But I was not happy watching Percy over there meowing away. And I was worried he might wander into the clutches of the hunting dogs at the bottom of the garden -- that didn't bear thinking about!!!! So over I went and the timid little creature just played 'cat and mouse' with me... So out came the trusty phone and on went the luring video. Quick as a flash the cute little mite was bounding after me and across the garden back to the patio -- and as far as I was concerned, relative safety! And he wandered around -- keeping a good distance from me.

The Man and I could tell the poor thing was hungry, but he was not interested in milk -- no way! So I had a little think -- wishing I had some uncooked fish -- Then I remembered that The Man had some smoked salmon lurking in the fridge! I took a few small thin slices and broke then up into little bites and put them into a little dish. Then I took a cracker and broke it up and sprinkled the bits around the dish.

In the meantime Percy had been investigating the neighbour's garden which borders the back of the house around the corner from the terrace. When his nose once again came into view, I do believe he got a whiff of smoked salmon -- I didn't stand too close, but closer than I had been previously -- it didn't take him long. Tentatively, he tasted a cracker -- he like that and had some more -- inching ever closer to the little bowl of fish! How I wish I'd videoed the little chap savouring the delights of smoked salmon.
Later I tried to entice him with a bit of sausage that had been cut up, but he wasn't interested. He found a place between the honeysuckle bush and the wall of the house and took a nap.

And that was the last we ever saw of Percy... We assume that during the night Mama came and got him. All the sausage was gone and so was the milk. No doubt she probably watched the day's activities from some hidden place. We kept an eye out for the little fella for the rest of our stay, but sad to say he'd disappeared. We saw Mama several times, and the last time it looked like she was due another litter...
Posted by The Broad at 9/19/2012 05:28:00 PM