A few days ago, one of the blogs that I follow surprised me -- and somewhat disappointed me. Not because of the political views expressed, which are not my views, but which I do nevertheless respect, but because of something else which I find disturbing and objectionable.

The writer questioned the Christianity of people who support the opposing party -- and so by default questioned mine. I confess that I have myself wondered the same about them! Not very helpful, is it? The only thing I can say in my defence is that I know in my soul this is wrong to do.

Because whether you are a 'Jumbo' or a 'Jackass', I do not believe that God takes sides. I do not believe that God, whether Christian, Jew, Muslim, Hindu, Buddhist, or any other persuasion, is political. And I firmly suggest that it is  time for a lot of people to cease and desist from bringing religion into the ungodly fray that is election time.

Don't get me wrong my heart will be broken if my man doesn't win. I will feel all doom and gloom. But what I believe is that though it is important to me who wins the election, the most important thing is how people work together for each other and their country despite their disappointments, and perhaps more importantly, despite victory.
Posted by The Broad at 10/24/2012 05:27:00 PM 43 comments:

How often does it happen that nothing goes wrong that could have? The above photos were taken minutes after the arrival of my daughter-in-law and my eldest grandson. Even the airport cooperated -- it's the first time I have ever been to Heathrow and it has not been a terrible mass of people. On the contrary, terminal 4 was -- serene --.

Upon our arrival home there was a letter from the Council saying he had been accepted in the school of our choice! As half-term starts in two days time his first day will be Monday 29th October. So far so good ...

But my goodness how much I have forgotten about the demands of young children! From getting them fed to putting them to bed! Back to schedules and timetables, homework and vegetables.

For the past 3 days I have been preparing my youngest son's bedroom for my grandson, Sam. My youngest son, Rob is now living in Vancouver with his girlfriend. If and/or when he returns to the UK it is very unlikely he will be living in the family home. So it's not as if he is being ousted from his long-held bedroom -- though we will always think of it as 'his' room, I expect.

I can not believe the state he left his room! For days before he left he claimed he was spending hours of time in his room in order to go through all his stuff and pack it away. HA! The room looked as if a bomb or two had gone off in it! And that was after The Man had cleared some ...

The first thing I attacked was the top of his chest of drawers. Most of it was trash, but a bagful of it was 'stuff he might still want' -- couldn't really see the surface. That didn't take but half an hour to sort out and dust and then empty and pack away the three drawers that were still full of clothes! And to think I thought he'd already done this!

Then there was his desk -- piled high with papers going back three or four years! Mixed in among this lot were candy wrappers, ticket stubs, pocket lint -- and so on. There were also boxes full of papers and bags of clothes to be disposed of somewhere or another. One bag of stuff he had deigned to throw out -- we think. I'll allow him the fact that  he hadn't stripped his bed -- we had to leave a 5 am to get him to the airport on time.

Then I dared to open his wardrobe! Great sense of satisfaction though to see the thing cleared out. I've even straightened out his shoes -- mostly football shoes of one kind or another. And a bag of shoes to throw away -- why oh why can't he actually physically assign stuff to the trash???? By the way -- these shoes were way way beyond repair -- suitable for the dustbin only -- Of course I haven't discussed the TOP of the wardrobe or the bags of posters or the stuff along the side of the wardrobe. Nor have I mentioned the dust or the state of the carpet or the videos and x-box games and and and and ......

So, now I remind myself that it's a good thing the lad has LOTS and LOTS of GOOD points! He is kind and thoughtful and never loses his temper (except with his brother and that doesn't count!). He can cook and he can bake gorgeous brownies and cookies. When I  need him to help me he always does and never complains. When we have dinner parties he serves and clears the table and helps wash up -- without asking and he is always polite and able to have an intelligent conversation. And he is very loving and caring to everyone.

Oh, and one final thing -- he left behind pots of money: First I'm going to count it and then I'll decide what to do with it! 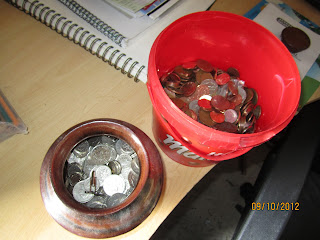 In other words, on Friday I cast my vote for President, Senator and Congressman. But maybe I'll have to cast it again. Casting an absentee ballot from abroad is an interesting business. Not to mention the fact that every state is different!

Thursday night I received a phone call from a certain political organization I belong to located throughout  Europe and the rest of the world. In fact, earlier in the day I had gone to the website www.votefromabroad.org as I realized I better get my act together if I wanted to vote in the Presidential election. So  the phone call was timely, even if it did come in the midst of boiling the potatoes! I immediately got right on it!

The State of Connecticut is one of the easiest to organize casting one's absentee ballot. But it's still a funny old procedure. First I had to print off a request for a ballot from the town clerk of the town where I have an address. I then fax a copy of it with an appropriate covering letter to somewhere 'abroad' and this organization dates it and forwards it to the appropriate people in Connecticut. I must then send the hard copy of the request to the town clerk. When it is received I will be sent an official state ballot which I am to fill out and put in an envelope. This envelope is put into another envelope with a form which identifies me as a legitimate voter. I then mail this larger, all inclusive envelope to the town clerk in Connecticut.

But, I hear you ask -- what if you don't get the ballot back in time????? Which I might not because it's getting a bit close to election day for all this palaver to get done. Enter the Federal Election Ballot.

Along with the request forms from the State of Connecticut I downloaded and printed out this ballot. What you do is fill in the ballot with the name of the President/Vice President, Senator and Member of Congress. Then mail it to the Town Clerk and IF by chance your official state ballot doesn't make it in time, they will count the Federal Ballot.

After about half an hour or so figuring out the instructions, I had the requests for the State ballot, and the Federal ballot ready for posting and the following day mailed them.