It feels like  being catapulted into a new life! I am figuring out all over again just what 'normal' is. Blogging and fellow bloggers  have become very important to me, but since my grandson has arrived I have found it impossible to find the time and the energy simultaneously to do much of either!

He met a new cousin!: 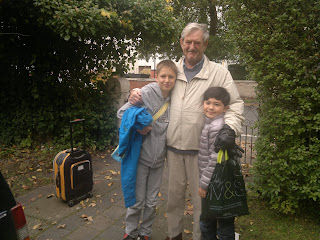 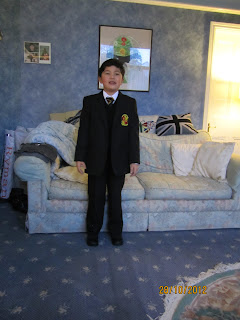 Spent a few days in London before saying farewell to Mom... 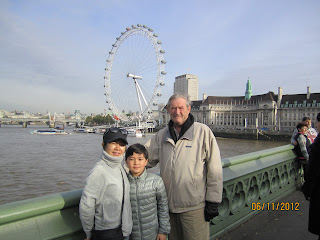 Not long after Sam started school we had a call from our son in Italy. The  news was not good, except that it was ... He had totalled his car in an accident during the rain when his car planed into a wall when it hit a large puddle. He and the two other people in the car were 'shaken not hurt' -- though they did end up in the hospital. As you can imagine euros are needed for another car as his job teaching takes him to various different schools all miles away from where he lives as well as each other!

Well there goes my dishwasher! Fortunately, it goes without saying, no one was hurt and no one is suing ... One of the passengers is a close friend who is able to lend him her car until the insurance runs out in a few weeks time. The last we heard he may have found a suitable replacement. This all happened the day before he was to have two job interviews! Fortune smiles on him though as the man who was to interview him thought so highly of his recommendations that he practically hired him without an interview!

All the while our new life continued apace. Sam got through his first week just fine. The following week we were to leave for London on Monday afternoon after school. We had special permission for him to have 3 days absence to spend the time with his mother before she flew back to Korea. The weekend before he was not well -- much coughing and fatigue. By Monday we decided to keep him off to continue resting though we left for London. Tuesday we went into London and saw a few sights. After lunch we headed for a quick look at Trafalgar Square before heading off to St. Paul's.

Shortly after getting off the bus Sam lost his lunch on the pavement -- The Man left Mom and me to it and I was so glad I had an unopened packed of tissues for the occasion! Insides cleaned out and feeling better we headed into the Cathedral. The Man and I opted out of exploring the place once again -- the 24 pound fee had a lot to do with that decision. However, my daughter-in-law and Sam made the most of their investment and not only climbed up into the Whispering Gallery, but also higher to the Golden Gallery, which is not only the highest place, but also outside! Not for me, I can tell you!!

The next day we made a silly mistake and decided to take the car to Greenwich. We enjoyed a quick visit to the newly rennovated Cutty Sark before heading off to the Observatory: 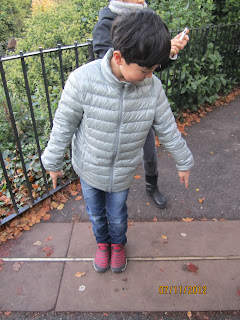 In the midst of our few days came the American election. As we were staying in a one bedroom flat and both rooms were being slept in at night it wasn't possible to watch television coverage. I woke every hour or so and checked my cell phone and got the news around 4.15 a.m.

So here we are back in Southport and for the moment it would seem there might be a routine establishing itself!