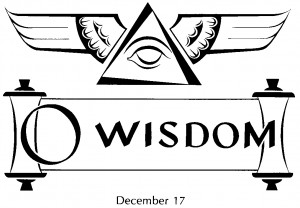 I grew up not so far from Newtown, Connecticut. I can smell the air and see the landscape so clearly. It's Christmas time. Decorations are up, Christmas trees are shining bright on the town green... and suddenly, in the midst of preparation and the great celebratory rush, devastation is thrust upon us. There have been other tragedies that have knocked us back at this time of year. The first I experienced was the assassination of President Kennedy on November 22, 1963. Another was the 21st of December 1988, the Lockerbie bombing of Pan Am 103. And now we suffer the chilling agony and pain of the slaughter of  the Innocents.

Today is the 17th of December. The day when many churches begin the recitation of the Antiphons of Advent. Today's reading is O Wisdom (O Sapientia) and it seems appropriate to dwell on this in order to try to make sense of what on earth is happening in our country in particular. I believe that if we as a nation do not do something to control the use and availability of guns it will happen again and again.

Do not tell me that guns don't kill people, people kill people. Don't tell me that more cars kill people than guns. The purpose of a gun is to kill. That is not the purpose of a car, as you well know! And the argument that we need to protect this Constitutional 'right' because it might be necessary for the populace to have guns should a government betray its people and needs to be overturned -- is so flawed  it beggars belief. First of all, what non-democratically elected person or group determines this? If this were true, it would follow that any person has the Constitutional right to determine that he or she has the right to destroy the government should he or she think that government needs overthrowing.

Right now there is uproar. I hope those with a voice will lead the way to a better way than the rule of lobbyists from the National Rifle Association. They have been pulling the strings for far to long. In the 60's I worked for my Congressman in his Washington office. As long ago as that Congressional and Senatorial offices were besieged with hundreds of letters and phone calls from the NRA. American legislators have got to stop being 'for hire'. Feelings are strong right now, but we all know that the strength of feeling will fade. The other day on television an American living in Britain said that teachers should be armed -- he is not alone. He insisted that if they had been armed in Newtown they would have been able to 'take him out'. What has happened when people believe this is an answer -- armed teachers of small children. And just where would this weapon be kept -- on the teacher? Under lock and key? How would it be feasible to access it if some maniac appears brandishing his own firearms?

Another woman today argued that if we weren't allowed to have guns then only the bad guy would have them ... I don't pretend to know the answer to the predicament we find ourselves. When there are over  300,000,000 guns in the country it seems an impossible task to have any kind of meaningful gun control. But perhaps we should start with a ban on assault weapons and take it from there -- if the Supreme Court doesn't knock it down. But I say, it's time to fight and maybe lose, but fight again and again and again.

So I call upon Wisdom today especially:

O Sapientia (Is. 11:2-3; 28:29): "O Wisdom, you come forth from the mouth of the Most High. You fill the universe and hold all things together in a strong yet gentle manner. O come to teach us the way of truth."