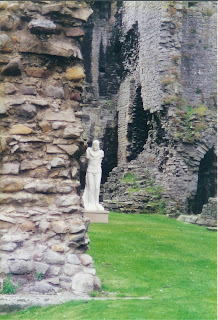 Ever since I read The Daughter of Time by Josephine Tey, many years ago, now,  I have been fascinated by the story of Richard III. Was he one of history's most infamous villains, or was he a victim of Tudor malice and lies.

Tey's book was first published in 1951. It tells the story of Inspector Alan Grant of Scotland Yard, who is laid up with a broken leg and becomes convinced that Richard the III has been wrongly maligned. He launches an investigation, with the help of the British Museum and a young American student. It's all very intriguing  and very convincing, as well!

My mother was also very interested in the story of Richard Plantagenet and on one of my parents' visits to England we ventured deep into the Yorkshire Dales to visit the  remains of Middleham Castle, Richard III's childhood home.

[So at this point in writing this post, I went to find the photographs I have from that visit and that led to several days of hunting and searching through hundreds of photographs before I found what I was looking for -- and to think I thought I'd organized them all into albums ... The task turned out to be rather overwhelming! Memory Lane is a very long road and I can't believe how jumbled the pictures have become over the years.] 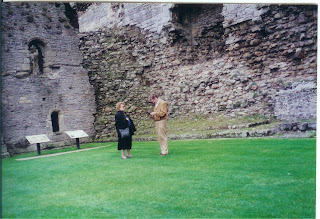 It seems the argument over where to bury the King's remains has been long decided. He is to be interred in Leicester Cathedral ... I can't help but think, much as it really doesn't matter ... that York Minster would be more fitting for this man of York ... but it seems to be a case of 'finders keepers' and of course what a coup for the treasury of Leicester Cathedral.

On thing is for certain, the mystery and the theories about this King of England will live forever in Controversy. Have fun, Historians -- I'm hooked!