An All Too Brief Encounter with Carnforth

I had an inkling many of the Brits would know where I was in my last post!

One of the most iconic British films ever made, Brief Encounter, is a bitter-sweet story of two people who meet while waiting for a train. Both are married to other people ...

When the film was in the planning the world was still at war and a decision was made to do the rail station scenes in Carnforth, Lancashire. It is said that Celia Johnson was not very happy at having to spend several weeks filming in darkest Lancashire! Anyone interested can see the entire film on You Tube.

Wikipedia explains the concept of the movie very well:

Brief Encounter is a 1945 British film directed by David Lean about the conventions of British suburban life, centring on a housewife for whom real love (as opposed to the polite arrangement of her marriage) brings unexpectedly violent emotions. The film stars Celia Johnson, Trevor Howard, Stanley Holloway and Joyce Carey. The screenplay is by Noël Coward, and is based on his 1936 one-act play Still Life. The soundtrack prominently features the Piano Concerto No. 2 by Sergei Rachmaninoff, played by Eileen Joyce.

Several years ago, The Man was in the area and decided to visit the train station. He was rather impressed with the fact that it had been turned into a fascinating museum that paid tribute to the movie by keeping the station as it was as a movie set. All of the pictures I used in my last post were in the movie. So on our way home from a lovely visit to Ulverston in the Lake District The Man decided to take an alternative route to the M6 Motorway, which took us through Carnforth. 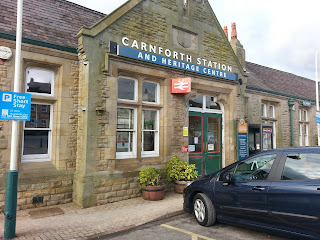 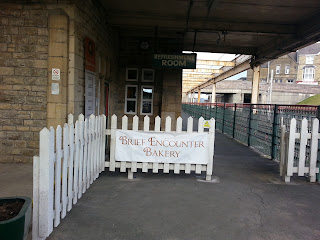 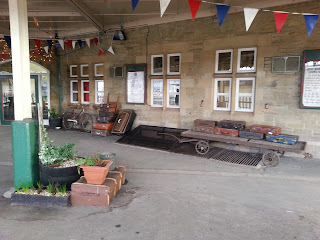 Sometimes it really is lovely to be transported back to another time -- if only briefly, if only in the imagination. 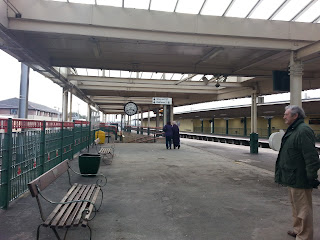 My enduring memory of the movie is of the clock in the background here. I suppose that 'time' figured heavily, even poignantly, in the story. 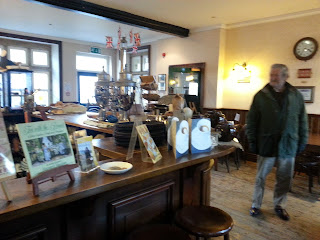 Unfortunately, we were running late and did not have time to stop for a cup of tea. But it looks like we will be visiting our friends in Ulverston from time to time, so I see the distinct possibility of a not so Brief Encounter!