More than Pretty Lakes Beside the Seaside by Morcambe Bay

The last weekend in February The Man, Sam and I took leave of Southport and headed for Ulverston in Cumbria for a visit with close friends who had moved up there last summer. Ulverston is in the southern part of the Lake District and I would think less of a tourist attraction. But it is interesting, nevertheless.

My friends live in Baycliff, a pretty little village overlooking Morcambe Bay. Morcambe Bay is an unusual area of sea and sand noted for its rich stocks of seafood and dangerous and fast-moving tides. Carnforth, which I wrote about in my last post, is located on the opposite side of the water from Baycliff.

When The Man was a navigator in the RAF he often flew over this area of Britain and was keen to visit Barrow-in-Furness and to check out little Piel Island while we were there. I had only recently heard of Piel Island -- by way of television actor and personality Martin Clunes in his program Islands of Britain'.

The drive to Barrow was interesting, but not particularly beautiful. Our first stop was the Roa Island Life Boat Station and Piel Island Ferry landing. Windswept and cold is how I shall remember it best! Fortunately the gates were locked shut so we didn't have to endure a walk around the building!

It is actually possible to reach the island by foot when the tide is out. Needless to say it is important to keep an schedule of the tides if one wants to cross and stay dry! This view of Piel Island is taken from Roa Island, which is very tiny and connected to the mainland by a causeway. Though we didn't eat at the cafe/restaurant there, I understand from  my friends that it is a good place to stop for lunch! 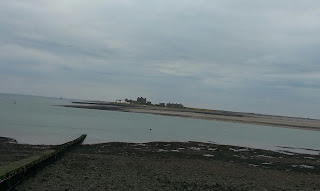 Considering its small size, Piel Island has quite a story to tell! From the middle ages when King Stephen in 1127 gave the island to the Savignac monks to 1487 when German mercenaries made for Piel in an attempt by John de la Pole, Earl of Lincoln, to wrest the throne from the Tudor king, Henry VII. Around 200 years later Charles II gave the island to one Duke of Abermarle and from then activity seemed to revolve around shipping, industry and salt. By the 18th century Piel was an important trading post and there was a large contingent of harbour pilots and customs officers in order to combat piracy and smuggling. Their cottages are now used as summer residences...

Currently, the island is occupied by the publican of the Ship Inn and his wife. Soon after taking possession of the pub the publican was crowned King of Piel Island. His coronation can be seen in the following clip, a testament to a certain quirkiness best found in these sceptred Isles, no doubt!!


What better way to end our day than with a meal in a local Baycliff pub/hotel, The Fisherman's Arms, followed by another glass of wine before the fire of the very English Farmers Arms on our way home! Cheers! 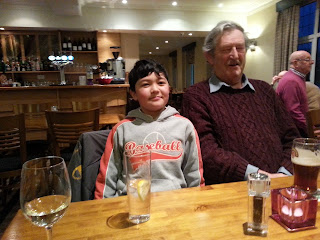