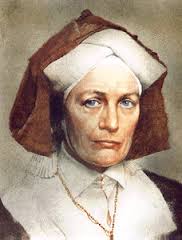 A week ago, I attended a lecture about Hildegaard of Bingem. A 12th Century nun she is considered by many scholars to be the first 'known' composer of music! She was also a respected theologian whose correspondents included the Pope, she was also a revered healer, who wrote medical and scientific works and she had 'visions'...

Hildegaard was the 10th child of a noble family and upon her birth her family promised her to the church, a 'child oblate' -- it was suggested by the lecturer that as the 10th child she could be considered 'tithed'! So at the age of 8 she entered an enclosed Benedictine 'anchorage' with an older nun, Jutta, who was to be her teacher.  The anchorage was attached to a monastery and Hildegaard lived there until Jutta died, when Hildegaard was 38 years old!

The anchorage had two windows -- one would have enabled her to witness the mass and the other would have given access to the outside world.

Anchors of both sexes, though from most accounts they seem to be largely women, led an ascetic life, shut off from the world inside a small room, usually built adjacent to a church so that they could follow the services, with only a small window acting as their link to the rest of humanity. Food would be passed through this window and refuse taken out. Most of the time would be spent in prayer, contemplation, or solitary handworking activities, like stitching and embroidering. Because they would become essentially dead to the world, anchors would receive their last rights from the bishop before their confinement in the anchorage. This macabre ceremony was a complete burial ceremony with the anchor laid out on a bier. (http://www.fordham.edu/halsall/med/hildegarde.asp)

In time  the fame of the two nuns spread and many pilgrims came to visit them for advice and spiritual guidance. As a result other noble families sent their daughters and soon a small convent was established. When Jutta died, Hildegaard was named Abbess and it was not long before she demanded from the Monestery, authority to build a convent in its own right. Although reluctant -- each postulant brought an impressive dowry with her -- the abbott was 'convinced' that it would be best to let Hildegaard have her way. She was suddenly laid low with a kind of seizure and would lie prone and immovable until her wish was granted. Hildegaard's fame and nobility were such that it was best to acquiesce to her wishes. She built the largest convent in Europe!

The second half of the lecture focused on Hildegaard's  music. Whether or not she wrote each piece of music herself or in concert with other sisters, is not known though it is probable. Until then singing was in the form of the Gregorian chant and followed the words of the Latin Mass. Hildegaard's compositions were Liturgical dramas with original music and words. These dramas can compared to the nativity and passion plays we see today.

She also wrote 2 symphonia and 77 songs. Unlike the monotone of the Gregorian chant, this music soars and the notes ascend and descend. It sounds very ethereal and rather primal. it also sounds like it should be sung rather than listened too. They were 'ruminatos' -- that is music and text working together to help contemplate the deeper meaning of her visions.

Hildegaard became famous for her miracles and was allowed to go on preaching missions outside of the convent. She also had a secretary -- a monk -- who went with her and wrote down her writings. Nowadays she is criticized for her conservatism in only allowing noble women to join her convent -- only they would have the kind of education and manner to understand her work, her visions, her theology...

Email ThisBlogThis!Share to TwitterShare to FacebookShare to Pinterest
Labels: Hildegaard of Bingem