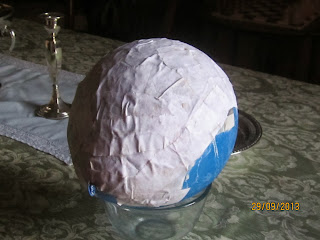 The grandson has an art project for a homework assignment. He must make a carnival mask. He can make this mask out of any material he wishes and of any design he desires. As with all his other 'homework' assignments Grandma must keep on eye on him and nag encourage him to do it.

While talking to his parents via Skype we were encouraged to make this mask out of papier-mache, which I readily informed them I had never done before. They both assured me that it was 'easy' and 'fun'! Use a balloon, they said... Sam was about as keen as I was to try. We went found several instructional sites on YouTube and it all looked pretty straight-forward: Make paste out of flour and water; tear newspaper into strips, get a balloon, paste the strips on the balloon; build at least 3 layers, and make the top layer from strips of white paper, such as the paper in my computer printer.

Why is it that when you want something like balloons you never have any and the first stores you go looking for them don't have any? The super market had them though I had to ask the manager where they were. It took him a while and he helpfully advised I could buy a cheaper packet that said "girls party" balloons. I told him it was  not a good idea to present Sam with anything that said "girls" on it and bought the slightly more expensive packet that didn't say anything about gender. Anyway, I digress.

On Saturday I reminded Sam that we needed to start this project and he got a balloon and excelled at blowing it up to a suitable size. Then I got out  a mixing bowl and made the slop paste. The recipe we found said two parts flour to one part water -- that we soon determined should have been the other way around -- easily fixed. Now I had remembered to cover the kitchen table with newspaper -- which much to my relief we still had in supply, as we quite regularly put it out with the weekly trash pickup. I found a tabloid size newspaper and Sam was very good at tearing the strips to the right size. But what I had more or less forgotten was that Sam is one of these kids who hates putting his hands in slop!

Then the balloon kept slipping and sliding and bouncing around the table and floor as both of us were trying to hold it down and get newspaper strips stuck on -- strips which were so sodden they kept ripping and disintegrating into a mass of yuck.  When we finally managed to get the 'sodding' over-wet strips stuck to the balloon they were in such a disarray as to be completely useless. I took it all off and we had to start again. By 'we' I mean 'I'...

My apron, well covered in paste, as well as the sleeves of my sweater/cardigan -- from trying to hold onto a balloon that was slipping and sliding all over the place and all over me -- I managed to somehow hold down the balloon and apply two layers of newspaper strips and one layer of computer paper strips successfully. Sam helped a bit. Although he tried to escape, I wouldn't let him! This morning the mask-to-be was dry -- it took a good 36 hours. When he got back from school, Sam was able to stab the balloon: 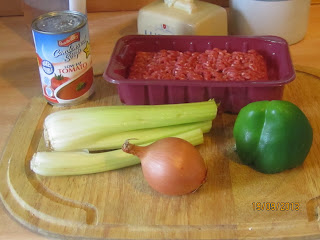 Last week the weather had turned brisk and crisp -- just perfect for Mom's Hamburger Pie! My mother collected as many recipes as she could to make 'hamburger' meat more interesting. This one came from St. Johnsbury, Vermont in 1952 -- or there-about. It's great because it can be made with some convenient convenience -- or not. Oh and it's very tasty, too! At least it's always been a hit whenever I've made it and all three of my sons have asked me for the recipe and make it themselves!

My mother has always said that the 'secret' ingredient giving it an extra special 'oomph' is the celery -- so don't be tempted to leave it out!  You will need the following:

Line a 9 or 10 inch pie plate with the pastry
chop to your liking the onion, green pepper and celery. I like mine finely chopped. Sauté in a little oil until soft and the kitchen smells wonderful! Add the mince (hamburger meat) and brown mixing everything together. When the meat is brown add the condensed soup and if needed some additional tomato sauce or pasata. Cook for 20-30 minutes, stirring occasionally. By the time you finish it should look like this: 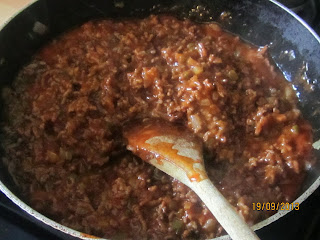 Dump the cooked mixture into the prepared pie plate, roll out a lid with the second piece of pastry and bake for 40-50 minutes at 400F (200C): It's always a good idea to cover the pastry edge with tinfoil to avoid over-browning... 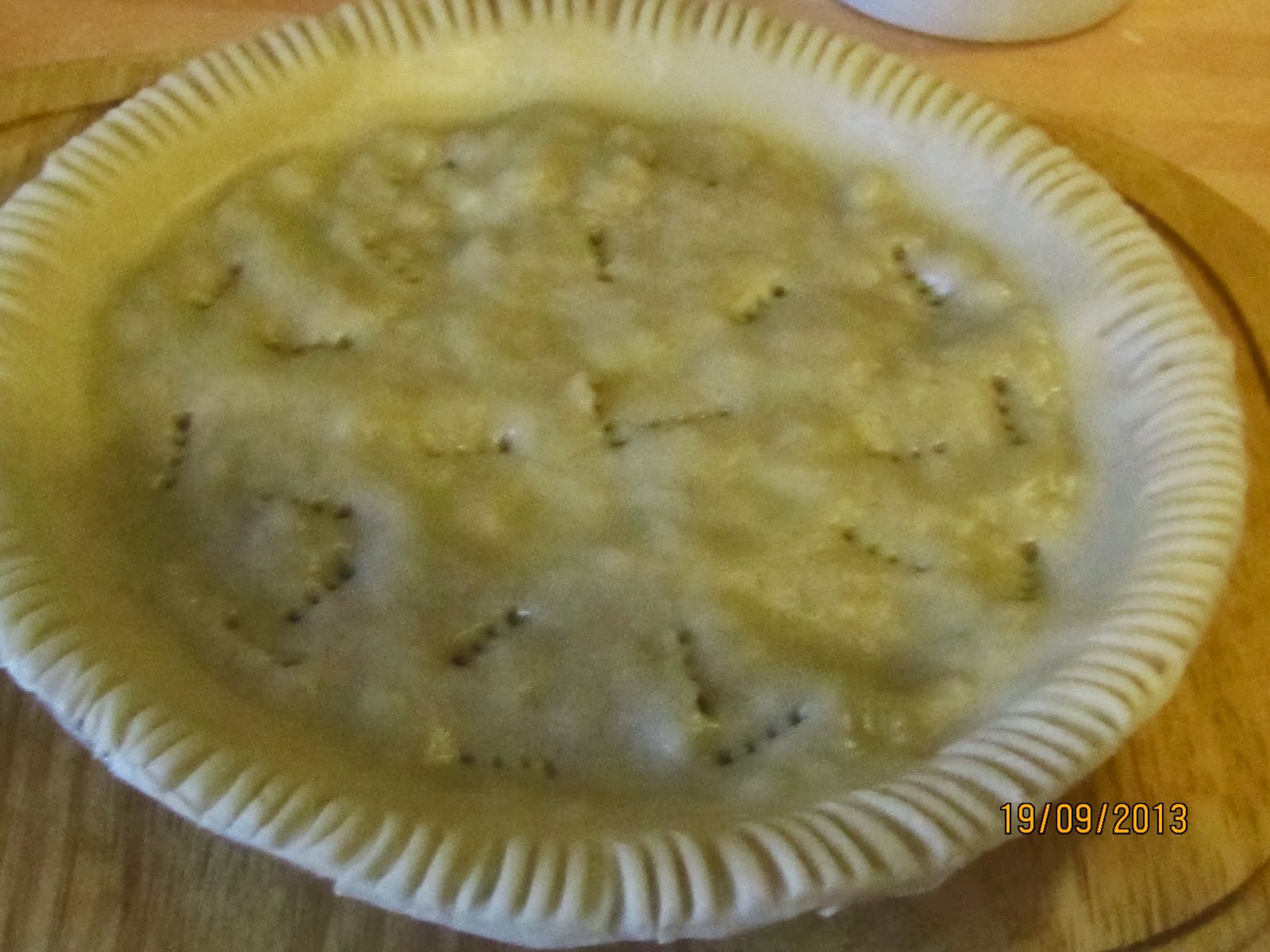 Recently,there has been a lot on television and in the newspapers about the wearing of the 'niqab' or Muslim veil. This is the type of veil that covers most of the face -- sometimes the eyes and the forehead are not covered, though most of the women I have seen wearing the niqab show only their eyes.

Some countries, including France, have banned the wearing of this veil in public places. This has lead to certain groups of making threats of violence against those countries. In Britain I have been surprised at the number of people -- at least those shown on television -- both members of the debate forums and those in the audience -- who believe that if women want to wear the veil they should be allowed to wear it. The people I am talking about are what some would call 'real British people' meaning 'white' and Anglo-Saxon.

Personally, my instinct when I see women attired in black Muslim dress and completely covered from head to toe is to recoil. But then I am pretty much a feminist and for me it goes against too much of what I believe women have had to fight against, have had to endure to gain their rightful place -- at least in western culture. And I wonder why those who would wear such a garment would choose to live in our world. Of course, many times the answer is that these are British women, born and bred who have fallen in love with a Muslim man and converted to his faith and so chosen this path. And so they are participating in their democratic right as a British citizen. The point being that it isn't always foreigners who make this choice. I do not have a problem with head scarves, or with the burqa -- if women choose that form of attire, far be it for me to object to that.

The authorities are now in a quandary about how to handle the questions that arise from this 'right'. A woman has been told that when she testifies before a jury she must uncover her face so that the jurors can see her when she testifies. Another woman was told that she could not teach her children with a veil covering her face -- she lost her job.

One woman wrote about wearing the full Muslim dress, that is the burqa and the full veil, to work and abandoned the idea because co-workers avoided her. This, is the crux of the matter for me. For me it represents a wish to 'separate' oneself from our culture -- more than anything else we judge others by how we see their faces. For all you know, as I am sitting here, I could be wearing a burqa and veil but because my 'veil' is the Internet, it is perfectly acceptable -- but 'face-to-face', in our culture,  we want to see for ourselves -- the voice is not enough.

The judge decided that the jury had a right to see a woman's face because it was necessary in order to make a fair judgement. But it has occurred to me that if this woman had worn a veil all her life would taking it off place her at a disadvantage because she did not have the experience of being so exposed to people. But then if you live in a foreign culture, sometimes you just have to go with the flow...

There could also be arguments that this form of dress holds security risks -- how do you really know it's a woman hidden beneath that garb and not some wicked man!
Posted by The Broad at 9/18/2013 04:25:00 PM 23 comments: