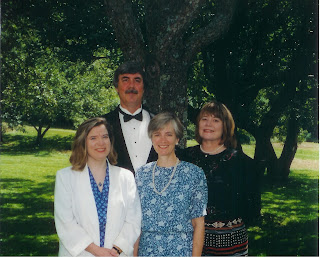 In Britain there is an expression one often hears to describe certain kinds of people as "keeping himself to himself". It's often ascribed to certain kinds of neighbours and the reasons for not getting to friendly. I rather think there is a bit too much of that kind of thing -- and not just with the British, either!

This is a serious post about something that has happened in my own family.

On August 24th my only brother, who lives alone, was found by the police in a semi-conscious state in his bathtub. He could not walk and did not know where he was or what had happened to him. He may have been there for over 24 hours.

My brother, Bill, has always "kept himself to himself". When he was a little boy he had a paper route and we sisters use to joke about how we never knew how much money he had -- only that he always had nice presents for us on Christmas! If he had problems we never knew what they were, only that he was looking kind of sad and eventually we'd find out if it was really serious -- like breaking up with his first girlfriend, for example. What a song and dance that was! I found that if I had a quiet word with him he would tell me -- but always I had to ask -- information was never volunteered!

Three or four years ago when I was home for Thanksgiving I inadvertently discovered one of his secrets. We were at my mother's apartment and I went into her bedroom for something. Bill was there and I saw him taking a couple of pills from a bottle that looked like a prescription. "Ah", I said, "Do you have high blood pressure, too?"


He answered quietly, "No, I have Parkinson's Disease." He also asked me to "not spread it around" -- I didn't promise him one way or the other. After some thought I decided to tell The Man and also my youngest sister, but not my 90 year old mother. By the end of Thanksgiving weekend my other sister also knew.

All of us were relieved to know because we had noticed that often his words were just slightly slurred and his speech a bit slower -- like when some people have a bit too much to drink and try to look sober. We had also noticed the slight shuffling of his feet when he walked.

I've thought a lot about Bill telling me he had Parkinson's and the way he told me. I really think he wanted to tell us, but didn't know how -- until I asked about what I had perchance observed. It has made me wonder how often it is that people aren't really secretive at all -- they just aren't able to share problems. Maybe they don't want to burden people with additional worries -- or maybe they don't trust anyone enough to thank they will care. I expect there are many reasons for reticence -- ranging from 'pride' to 'insecurity' and 'fear'. Maye it's growing up with three sisters, who when they are together can be quite a formidable force. That he loved us all has never been in doubt -- he always has gone out of his way to see us when we are visiting and he always seems really pleased -- even content -- to be in our company.

Several years ago my brother's second marriage ended and since then he had been living on his own in an apartment about an hour away from my Mom's residence. Mom and sisters all wished he had a girlfriend, but of that there was no evidence -- suspicions maybe -- but not a shred! He even admitted to me that 'I do get kind of lonely'...

Over the past three years I've been able to visit the my mother once a year for  a few weeks at a time. In that time, I've seen some deterioration in Bill's condition, but on the whole he seemed to be doing quite well and it was good to know that he was there regularly for my mother. I was looking forward to seeing him in the Fall.