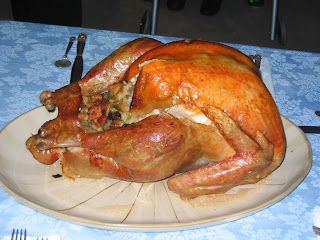 On 23 September, I booked a flight to The States for November 20th. Thanksgiving Day was on my mind and I thought it would be nice to be with my Mom and sister this year. I do enjoy going back for Thanksgiving and my sister goes out of her way to make it a special occasion -- bringing all the necessary ingredients and equipment with her from Vermont.

Mom has a fully equipped kitchen, but when she moved into the retirement center left behind most of her cooking paraphernalia. She has never missed having it! Every time you mention to her that she doesn't have to cook any more she smiles broadly. Not that she was a bad cook. She was in fact a very good, if plain cook. My father was a rather fussy eater -- he didn't like fish and he didn't like cheese! His dislike of cheese made us all laugh whenever he ate pizza, which he loved. Anyway, because her 'Other Half' didn't like to experiment with different kinds of food, my mother lost interest in really developing her cookery skills. My sister, is an entirely different story! The woman can cook!

So last Sunday night, while watching the final episode of Downton Abbey, and began to feel very uncomfortable -- an ache in my right side that persisted and kept me from having a good night sleep. Around 4.00 pm the following day, when the pain did not subside, but seemed to be getting more persistent I called the Surgery to see if I could see a doctor -- if possible the next day. Surprisingly, there was an opening with my favourite doctor 45 minutes later! I was worried that maybe I had appendicitis, but the doctor thought it was probably a pulled muscle as the symptoms didn't really point to appendicitis. However, if symptoms should increase or suddenly get worse, I should call the next day for an emergency appointment. He would not be that day, but if two days later I had not improved I should call reception and tell them that he wanted to see me again. Symptoms did not get worse, but did not improve so on Thursday I saw him again -- and remembered to bring the 'water' sample he asked me to bring! As soon as he tested the sample, he could see that I had a urinary infection.

So the third day of antibiotics later and the pain has abated significantly, but not disappeared. The doctor had me take a blood test and sent the sample for further testing and did not rule out the possibility of the appendix -- I haven't heard anything back, so I am hopeful to get an ''all clear" Monday. I've never not been able to take a flight and hope this is not the first time! In the meantime, it's all put rather a damper on packing and so on. I still have the occasional twinge. So glad I have insurance that covers me just in case I'm unable to make. For one thing is for certain, I just as soon not be in the USA if I need emergency surgery for anything! My flight is Wednesday morning -- I'm holding my breath!!
Posted by The Broad at 11/16/2013 05:22:00 PM 42 comments: