ABroad in Portugal: Getting My Bearings 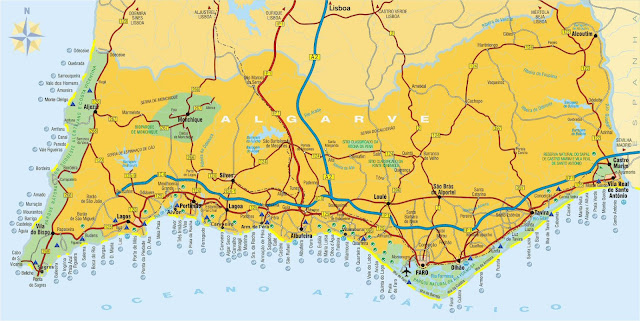 
. In 1755 a Tsunami and Earthquake destroyed most of the ancient Moorish towns and villages in the Algarve. Cabanas is an old fishing village just outside of the old city of Tavira. Although Tavira is very modern and built up, the old city is quite charming and pretty along the river. Although we did no spend much time there, we did do most our grocery shopping in the outskirts -- a mere 3 kilometers from the caravan site. The evening after we went to Barril Beach, we headed into Cabanas for a meal. The speciality of the Algarve being fish and seafood and I chose sea bass. The men opted for a mixed grill of various cuts of meat. I don't remember much about their meals except that The Man had far  more than he expected!

My sea bass came 'butterflied' and was a beautiful thing to behold. It was delicious, but very bony. It seems to be a traditional way the Portuguese serve sea bass as it was prepared the same way on the one other occasion I ordered it.

What I loved about eating out in Portugal is that the food was always dependably delicious, simply prepared and fresh. And the wine we found to be very drinkable! I discovered 'vinho verde' which has a lower alcohol content and a lovely light taste. So going out to dinner one had good unpretentious food with as much wine as you would want to drink with the bill for two people seldom going over 30 euros and often just over 20! My stepson had told us that when they stayed in Portugal they ate in one night and out the next. I can understand why and next time we will not stock up on so much food to prepare ourselves!

The other thing that must be emphasized is how welcoming the Portuguese people were. We had discovered two local restaurants in a small village near to the caravan. Twice we showed up well after 9 o'clock -- barely hoping they would be open and willing to serve us. No problem -- they happily served us with friendliness and good cheer.

The Algarve east of Faro is less spoiled by modern villas and touristy apartment buildings than the western side of the province. However, that is not to say that modernity does not abound. However, the old ways and traditions seem to have remained more in the area than the wealthier more affluent areas to the west of Faro.
Posted by The Broad at 4/05/2016 06:09:00 PM

Email ThisBlogThis!Share to TwitterShare to FacebookShare to Pinterest
Labels: food, The Algarve, travel