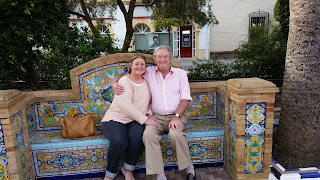 I loved this tiled courtyard in Ayamonte, Spain -- the down immediately across the border from Portugal. This was the first time we ventured outside of Portugal -- on a lovely sunny day. As there were no border controls it was just like going from one state to another in the U.S.  Except of course for the language difference and the fact that in Spain we were an hour ahead. Other than this courtyard and the harbour area, we did most of our exploring outside of Ayamonte in nearby seaside towns. There were lots and lots of very new, very impersonal apartment buildings aiming to tempt holidaymakers. All had similar faux Moorish facades, which left both The Man and me rather cold. An old seaside village, however, was very appealing as was the beach restaurant and the sound of the ocean in the distance
.

The above picture on the left is of SanLucar Guadiana, Spain, and to the right, Alcoutim, Portugal. Friends of ours from The Man's RAF days had retired to this picturesque Spanish town and we were curious to see it from the Portuguese side of the river. Two weeks later we visited our friends and a very pleasant time we had. Much of the life is dependent on using transportation to and from the two villages and along one river bank or the other. Our friends make a great deal of use of their motorized dinghy, either visiting their plot of gardening  land or crossing over for a night of carousing with like-minded ex-pats. I was particularly impressed by one woman named Jack who lived on her own on a boat in the middle of the river. Her mode of transportation was a canoe in which she had paddled solo, in the dark, to the venue -- with her instruments -- At the end of the night, in the wee hours she paddled back several kilometers to her boat. It was a fabulous evening with lots of laughing, good food and wine! Even if I did rather make a meal of getting in and out of the dinghy on the way across the river to Alcoutim. Fortunately, we saw the owner of the lone river taxi, which we booked for midnight and I didn't have to finagle my way back into the rubber dinghy to get back! 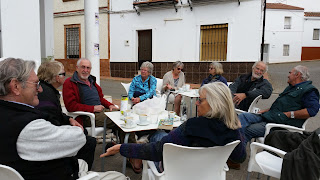 The morning after our night of carousing, we met again with some of the ex-pats from the night before. The Man is seated lower left and is chatting to a woman who has recently trekked to base camp at Mount Everest.  Personally, I can't imagine it! 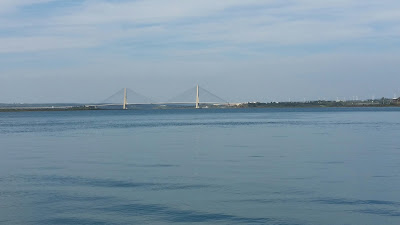 You can just about make out the bridge across the river which separates Spain from the Algarve in Portugal. From a distance the bridge looks impressive enough. But, in fact, it is really quite ordinary -- if not to me a little less than ordinary. I was quite disappointed to discover one night that the bridge is not in any way lit -- but very dark and ghost-like to me. And the roadway on the bridge itself is very bumpy and rough. It made me think that perhaps there were maintenance issues between the two countries... 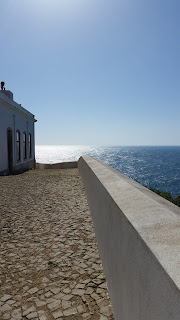 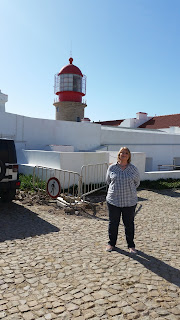 One of my favourite days was our excursion to the southwestern most point of continental
Europe, Cabo de Sao Vicente. Glorious sunshine and spectacular views. The spot is just outside of Sagres and we had a very pleasant lunch there in a very ordinary looking cafe by the harbour. There we met a couple from Germany, a Brit and a Canadian living in Britain. They were very interesting and talkative. The Germans had an interesting take on the influx of immigrants to Germany. At least it was a view I hadn't heard before. He said that Germany needed as many young immigrants as it could get since they have an aging population and no population growth. He said they need workers to help support the country and its future.

Well that is pretty much the Portuguese part of our February adventure. But still to come is our excursion to Spain and The Man revisiting The Rock after 35  years!
Posted by The Broad at 5/10/2016 02:56:00 PM