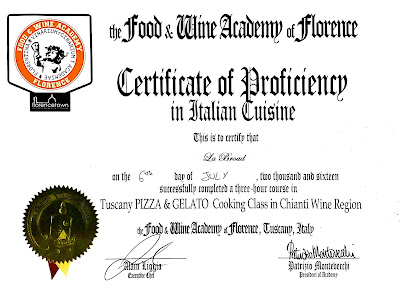 Indeed! Thatsa me!! I brought my certificate to France as |I think the most suitable place for it is the kitchen wall here. But I still need to find a suitable frame for it. You will all be impressed to know that this feat was accomplished in  about 3 hours in the midst of Chianti-land. It was, in fact a great fun day with lots of laughter and lunch -- the result of our culinary efforts.

Our chef and teacher, Alan, was amusing and accomplished. We started the day with a visit to one of the local markets in Florence -- checking out the hams and the cheeses and the fruits and the vegetables. Wine and goodies were served at about  10 a.m. -- too early for most of us. My son and Alan hit the coffee bar soon afterward and I suspect they may have each had a Grappa to wash out the dregs in their cups...

Florence was a very hot and sticky city that day and I was pleased to find myself in an air-conditioned bus and on our way to the countryside and the place of the cooking school.  It was a very grand place. The winery was also a kind of museum explaining the history of chianti and the soil that produces this produces this particular variety. We were to eat surrounded by wooden barrels and a sense of the 'ages' enveloping us.

In the first part of the lesson we learned how to make a true bolognaise sauce and also a fresh tomato sauce made with very fresh cherry tomatoes. Alan made these two sauces and we had to make the pasta to accompany them. In addition we made our own dessert: tiramisu!

There were 14 students in all: 7 of us were in the same family; the remaining 7 were Americans. In fact of the whole group, only my son was British -- and he is American, too, by right of birth. During the lesson we sat at a counter with the appropriate ingredients we would need in front of us. I am not a bad cook and the making of pasta is particularly easy. |However, came apart at the first hurdle!

"It's only pasta" was Alan's mantra and he repeated it to me when I stumbled. The instructions were quite clear. Take the flour, mix the salt (tiny bit) and make a well in the centre. I did as I was told. We were then to break the egg into the center and stir it up adding flour a little at a time until you had a soft ball. But when I broke my egg into the centre it ran up and over the wall of flour I had not ensured was quite high enough -- and started to run towards the edge of the counter and , God forbid, the floor! As any right-minded student would do, I endeavoured to stop the flow by deluging the runaway egg with flour and mashing it back where it belonged into a soggy and unwieldy mess!

I was mortified, but no one else witnessed my dilemma because they were too busy getting it right! And then Alan came and quoted his delightful mantra into my ear; "It's only pasta"!

Eventually, I managed to roll out an acceptable piece of pasta dough and made the required ravioli stuffed with ricotta; and the tagliatelle from the bits on the side. Then all of our efforts were collected onto a huge communal platter and we off to learning how to make tiramisu. Not hitches there. I made my individual dessert with no difficulties. I remember absolutely nothing -- or almost nothing about how to make it. However, my son makes the best tiramisu I have ever had, so I figure wait for him to come home and then get him to make it!

Lesson over, it was time to make our way to the dining room to enjoy the fruits of our so- called labour! And very enjoyable it was, too...

You Just Never Know What Will Happen Next!

So basking in my newly discovered method of connecting successfully to the Internet,  not to mention the late summer heat wave, I was very happy to be able to Skype with my eldest son in South Korea. This week brings their  celebration of  Thanksgiving,, Chuseok so he and the children have several days off for the celebrations. Which also means it is very convenient to Skype!

So there we were discussing the food he was planning to prepare and the guests he had invited when all of a sudden he got a very peculiar look on his face and said "We are having an earthquake". His wife I could hear in the background, and he jumped up and ordered everyone under the doorway. And |I sat here in France, having witnessed the room shake, looking at a blank screen and hearing their voices in the background.

In less than a minute he was back in front of the screen 'shaken but not stirred' explaining what the sensation had been like -- he said it started very slowly and suddenly the intensity of the shaking began to increase -- he said that was he most frightening aspect because he had no idea when it would stop intensifying. Heejung, soon had information that the earthquake had registered as 5.1 on the Richter scale. Earthquakes are very rare in South Korea, despite the fact it is so close to Japan, which is on the Rim of Fire. Until yesterday 5.5 was the most severe that had ever been recorded. Heejung suggested that perhaps the North had tested another device, but  son said their town was too far south to have felt any aftershocks if they had. We talked for a few more minutes and then he went off to inspect the building and any  damage that might have been incurred.

Later I received a message from him that there had been a second earthquake, this time measuring 5.8 on the Richter scale -- and the largest earthquake ever recorded in Korea. The epicenter of both events was not far from their city of Geongsan and was a place I had visited with my daughter-in-law almost two years ago.
Posted by The Broad at 9/13/2016 06:04:00 PM 17 comments:

Posting Post Brexit under the Shade of the Old Oak Tree

I could, of course, blame post Brexit blues. Which wouldn't be entirely false -- at least for a couple of days. At that point I was forced to leave for two weeks in Italy visiting my son, Andy, who lives about an hour north of Venice. A week later we were off to Florence for a week with my youngest sister and her two sons and their girlfriends. We all stayed in a beautiful old villa in the hills overlooking the city's Duomo. Idyllic, yes it was. It was also unbearably hot.

I will write more about my Italian adventures soon. Once back in the UK we had only a few weeks to organize our annual sojourn to France and also dismantle the kitchen for it's renovation. An anecdote to the kitchen is that I am so glad I am not there as is usual with these things it has not been straightforward -- nor was it ompleted in the promised two weeks!!! More about that later, too...

So here I sit in the French sunshine of September -- under the oak tree, with an mobile Internet connection enabling me to at long last do a bit more than download email and check the weather forecast. It is not perfect, but it is a vast improvement and better than having to beg Internet access from willing friends.

As for Brexit... No one quite believes it will actually ever happen and everyone is afraid that maybe it will. It has occurred to me and I have heard it compared to the 'phony war' of World War II. On the one hand -- please just get on with it -- and on the other maybe it won't happen after all. Personally, I feel pretty much 'doom and gloom'. Not particularly about Britain, as much as about the whole European Union and its future. Of course if I really want for 'Doom and Gloom' this coming November could Trump all of this into something far more alarming...

Best to lie back under the old oak tree listening to Classic FM , blissfully content and almost carefree... 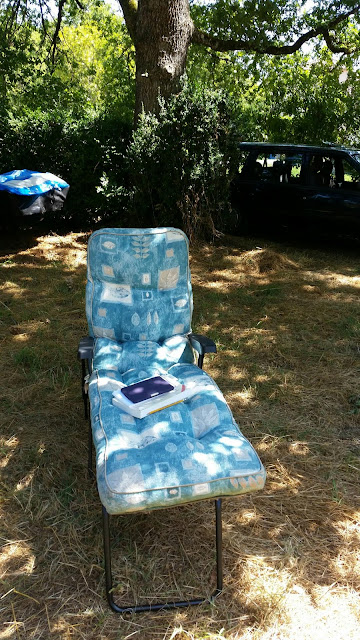