So then... The day following my last post I turned the radio on only to discover the bluetooth reception was terrible. I thought it was the terrible weather  we had been having, but nothe , it is still terrible.

I went back to the Internet and looked up my system and found the instructions that had been missing in the box. Now why didn't I do that in the first place? I discovered  first of all that I had not pulled the antenna out far enough so that I could swivel it around for good DAB reception!

So now even though the bluetooth is now a flop, I am back to my original plan to have a digital radio in  working order...

Oh, hell, I guess I will just have to put up with being just another pretty face...

Still not Just a Pretty Face

For Christmas my son and his girl gave me a new music system. Nothing particularly fancy, but it has a DAB radio, an FM radio, a CD player and Bluetooth. Bluetooth was not one of my requirements, just a surprising extra. Since I rarely have had need of it, Bluetooth, is a feature I don't often consider, even though my phone and new little computer have it. The only time I have had need of it was when I briefly was besotted with the idea of a selfie stick. 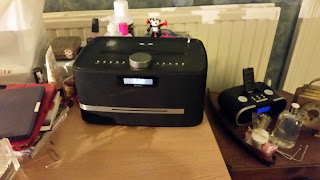 I have had a DAB radio for a few years -- in the kitchen. However, when the kitchen was recently dismantled that radio got moved into my study. I had an old hi-fi system with multiple cd holders, which was not playing CD's very well and the radio had terrible FM reception. Thus my request for a new system.

So a day or two after Christmas I opened up the box and took my new toy out. The DAB radio reception was terrible! I was so disappointed. But at least the CD player was just fine and dandy... FM radio was non-existent -- no reception at all. I have since learned from the Internet that DAB reception can be very problematic indeed.

So, as is  my wont, I complained and explained to my middle son. And he said why don't you connect with bluetooth? He then proceeded to connect his phone's bluetooth, via a special app, to my new hi-fi and 'bingo' perfect reception. A few days later middle son left to return to Italy and I still hadn't figured out how exactly he had done it. And thinking about it it was not exactly convenient to tie up my phone with the hi fi in my study.

However sitting on my desk right next to my  new present, is my little travel computer which also has BT! After some investigation -- looking for the app I would need and how to connect it to the radio, I discovered that aq feature of Windows 10 is the ability to connect easily to BT devices!  All I had to do was put the radio into "BT Mode", turn the BT on on the computer, find the radio station and the computer speakers would automatically find the BT speakers on the hi-fi!

I did have to fiddle-fi-diddle a tiny little bit, but I did it -- by myself! And now here I am listening to my favourite station and feeling quite smug.... Several hours after writing this post, I realized that I had not published it when closing down -- as I had meant to do... Maybe I am just another pretty face ;-)
Posted by The Broad at 1/12/2017 03:37:00 PM 6 comments:

For the first time in my life, Christmas was an unmitigated disaster. Believe me, it was all going so well until we all were to sit down for Christmas dinner. Noses got out of joint, tempers flared and people walked out as the main course was about to be served!

I am still reeling from the aftermath, although, fortunately, I am not being held to blame by anyone. But oh my there is a lot of forgiving that needs to be done and it is up to others to make amends. An important relationship may be broken beyond repair -- time will tell.